George Strait: “Love Is Everything” 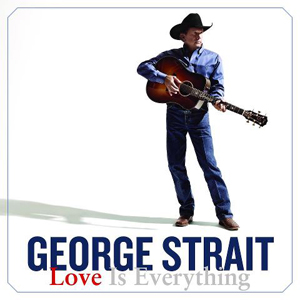 In his 32nd year of recording hit after smash-hit, does the 62-year-old George Strait really need to be singing about girls in cotton dresses and having a car that impresses them? Probably not, but that’s exactly how he opens Love Is Everything: with the admittedly catchy but manipulatively tear-jerking “I Got a Car.” It seems King George can get away with pretty much whatever he wants these days, especially on an album releasd concurrent with his highly emotional farewell tour. But as sincere as he may be singing the album’s closing track, aptly titled “When the Credits Roll,” the slick, mid-tempo number is little more than a fluffy swab of cotton candy. Fortunately,  there are a few jukebox-worthy gems in between those two clunky bookends. “Blue Melodies” and “I Just Can’t Go On Dying Like This” are great, slow-paced sawdust shufflers, and “I Thought I Heard My Heart Sing” is a fiddle-riffic tune that demands a guy twirl his girl. Still, as Strait albums go, it pales next his classics and even his solid run of releases from the last few years (Here For a Good Time, Twang, and especially Troubadour). Love Is Everything won’t necessarily diminish King George’s legacy, but considering the glorious reign he’s had, it’s a shame he didn’t end on a higher note. As this cowboy rides away, he leaves fans with a decent album instead of a great one.  — KELLY DEARMORE