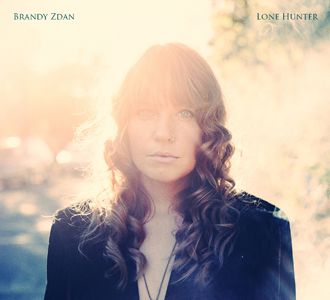 Clocking in at a modest 21-minutes, Brandy Zdan’s debut six-song EP, Lone Hunter, is a textbook example of the leave-’em-wanting-more ethos at its best. “Debut” seems a misnomer, given that the native Canadian (now living in Austin) is no out-of-nowhere rookie: she’s already recorded two albums as one-half of the Winnipeg-formed duo Twilight Hotel (with partner Dave Quanbury), and played a supporting role as the Trishas’ unofficial fifth member (playing all their instrumental leads onstage but not singing a note) for the last couple of years now. But this is Zdan’s first turn in the spotlight under her own name, and apart from a few assists from producer George Reiff, pedal steel player Ricky Ray Jackson and Trishas Jamie Wilson and Kelley Mickwee, it’s a one-woman tour de force. Zdan plays guitar, lap steel, Wurlitzer, synths, drums and percussion, and her voice is an understated stunner (especially on the gorgeous “O Where.”) Elsewhere, “Blood As the Ink” jumps out with its indie-rock pulse and indelibly catchy chorus, and the title track is a mesmerizingly spare beauty reminiscent of prime Nick Drake. But really, there’s not a wasted note or minute on here. Odds are, you’ll be playing the whole thing at least two or three times in a row after the first listen. — RICHARD SKANSE