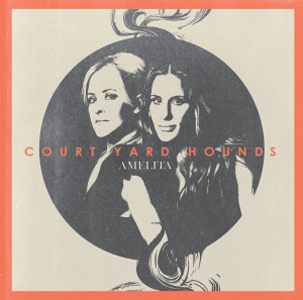 Long before Natalie Maines turned the Dixie Chicks into a runaway freight train without brakes, they were a roots band anchored in acoustic instruments and the stellar musicianship of sisters Emily Robison and Martie Maguire (nee Erwin). When the Chicks went  on hiatus, the sisters kept on playing together as the Court Yard Hounds, offering a more esoteric take on acoustic songcraft with their self-titled 2010 debut as well as creative outlet for Robison in the wake of her divorce. Three years later, the dust has settled and the CYH are back with a new album, Amelita, and a much brighter outlook.

Again enlisting producer Jim Scott, known for his lean rock work for Wilco, Tom Petty and even the Rolling Stones, the sisters have created an album that suggests lighter hearts, open spaces and the notion of what life might bring. There’s nothing prim or precious here, not even cute, but certainly the joy of making music is felt. Starting with the first single, “Sunshine,” with its striding rhythms, sparkling melody, weightless harmonies and Robison’s dusty, Susanna Hoffs-evoking lead vocals, it’s a new day. Even the irony that the “Sunshine” in the title is actually a nickname bestowed upon a dark-cloud friend is played with beaming delight. An equal measure of exuberance buoys the title track, even though it concerns a south-of-the-border prostitute. With a strong Mexican tinge, the fiddle darting in and out, the rhythms rising up, “Amelita” is, simply put, the California-feeling love child of Los Lobos and the Bangles.

Even the meditative “Are You Man Enough?” suggests a longing more than a challenge, and the knowledge of a woman seeking meaning, not a little girl seeking refuge. Co-written with Ryan Adams (who also produced the track), it’s representative of his bruised-heart sensitivity at its best and demonstrates there is grace and peace in adult desire. But perhaps nothing on the album captures the Hounds’ mood as much as “Aimless Upward.” With stand-alone tom tom snaps, a few rolling acoustic guitar circles and the silky part of Robison’s voice rippling with the rise of the melody, she sings, “We are seeds with promises to keep.”

Having been through the fire and the storm, Martie Maguire and Emily Robison understand finding the sweet in the chaos. A deep peace informs Amelita, not from exhaustion or surrender, but from knowing that no matter what comes, your way will be found and, indeed, followed to better times/places. — HOLLY GLEASON