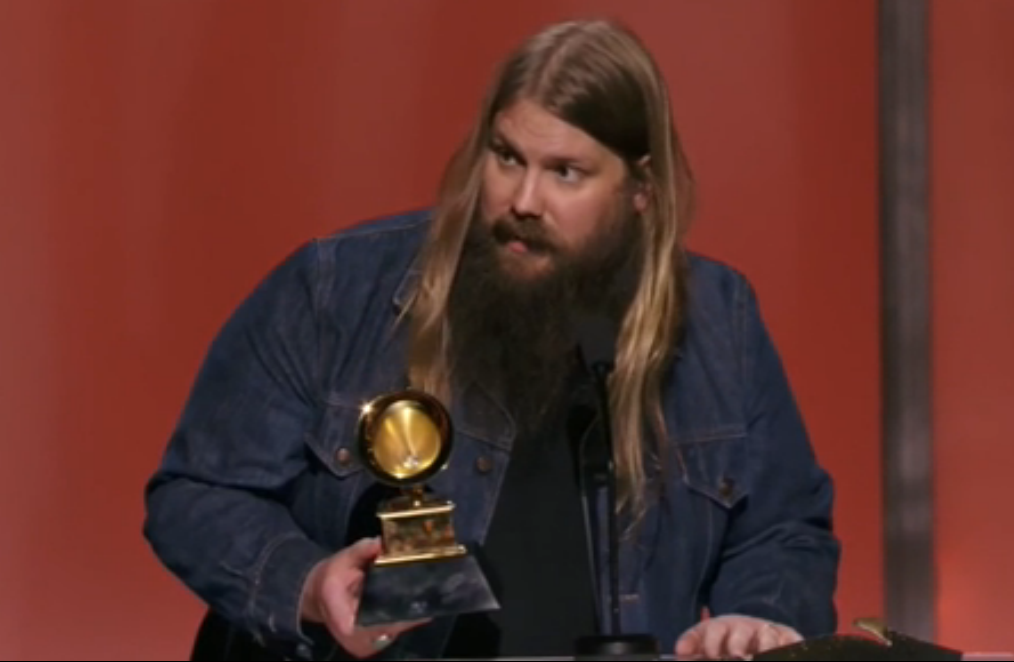 “This is something that you never ever, ever dream of, so I’m super grateful for it,” Stapleton said after winning the top country award. One might assume many artists do indeed dream of Grammy wins, but his humility was clearly genuine.

Traveller was also nominated for Album of the Year (which went to Taylor Swift’s 1989), and the title track went up against the Hayes Carll-penned song “Chances Are,” sung by Lee Ann Womack, in the Best Country Song category (which went to Little Big Town for “Girl Crush”). 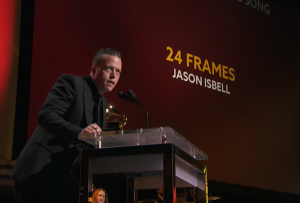 Jason Isbell accepting one of his two Grammys (this one for Best American Roots Song, for “24 Frames”). (From Grammy.com)

Isbell faced strong competition in both of his winning categories. Also nominated for Best American Roots Song were the Don Henley/Stan Lynch composition “The Cost of Living,” from Henley’s Texas hometown-titled Cass County; Raul Malo’s “All Night Long,” from the Mavericks’ Mono; the Punch Brothers’ “Julep,” from The Phosphorescent Blues; and the title track from Emmylou Harris and Houston kid Rodney Crowell’s The Traveling Kind. The latter three also were Best Americana Album nominees, along with Brandi Carlile’s The Firewatcher’s Daughter. In another quirk of Grammy voting, Producer of the Year nominee Dave Cobb — who helmed both Stapleton’s and Isbell’s albums — lost to Uptown Funk producer Jeff Bhasker.

Lone Star Music’s own stars, Shauna and Sarah Dodds of Austin’s Backstage Design — who designed this site — earned their second Grammy for Best Recording Package for Asleep at the Wheel’s Still the King: Celebrating the Music of Bob Wills and His Texas Playboys. They won in the same category in 2014 for Reckless Kelly’s Long Night Moon; their second nomination earned for a Reckless Kelly album design.

In one of the odder categories, Patty Griffin competed against Rhiannon Giddens, Glen Hansard Norman Blake and Béla Fleck and Abigail Washburn for Best Folk Album, which went to Fleck and Washburn. The couple were bested by Mavis Staples, however, in the Best American Roots Performance category; Punch Brothers, the Milk Carton Kids and Buddy Guy also were contenders. Guy did take home a golden gramophone, however; he won Best Blues Album for Born to Play the Blues.

And speaking of blues, one of the prime-time telecast’s highlights was a tribute to B.B. King performed by Stapleton, Bonnie Raitt and Austinite Gary Clark Jr. The trio did the late blues boy proud.

The Eagles and Jackson Browne performed “Take It Easy” in tribute to Glenn Frey, but the song couldn’t take flight, sadly, because the players were still in visible stages of mourning.

All of the roots/Americana awards, along with production awards, were presented in the pre-telecast. But during the prime-time show, Austin City Limits producer Terry Lickona, who also co-produces the Grammy telecast, could be seen often in control room shots. Lickona also may have had something to do with one of the sweeter moments of the telecast: the “In Memoriam” recognition of ACL creator Bill Arhos, among the many creative talents who passed away in the last year.