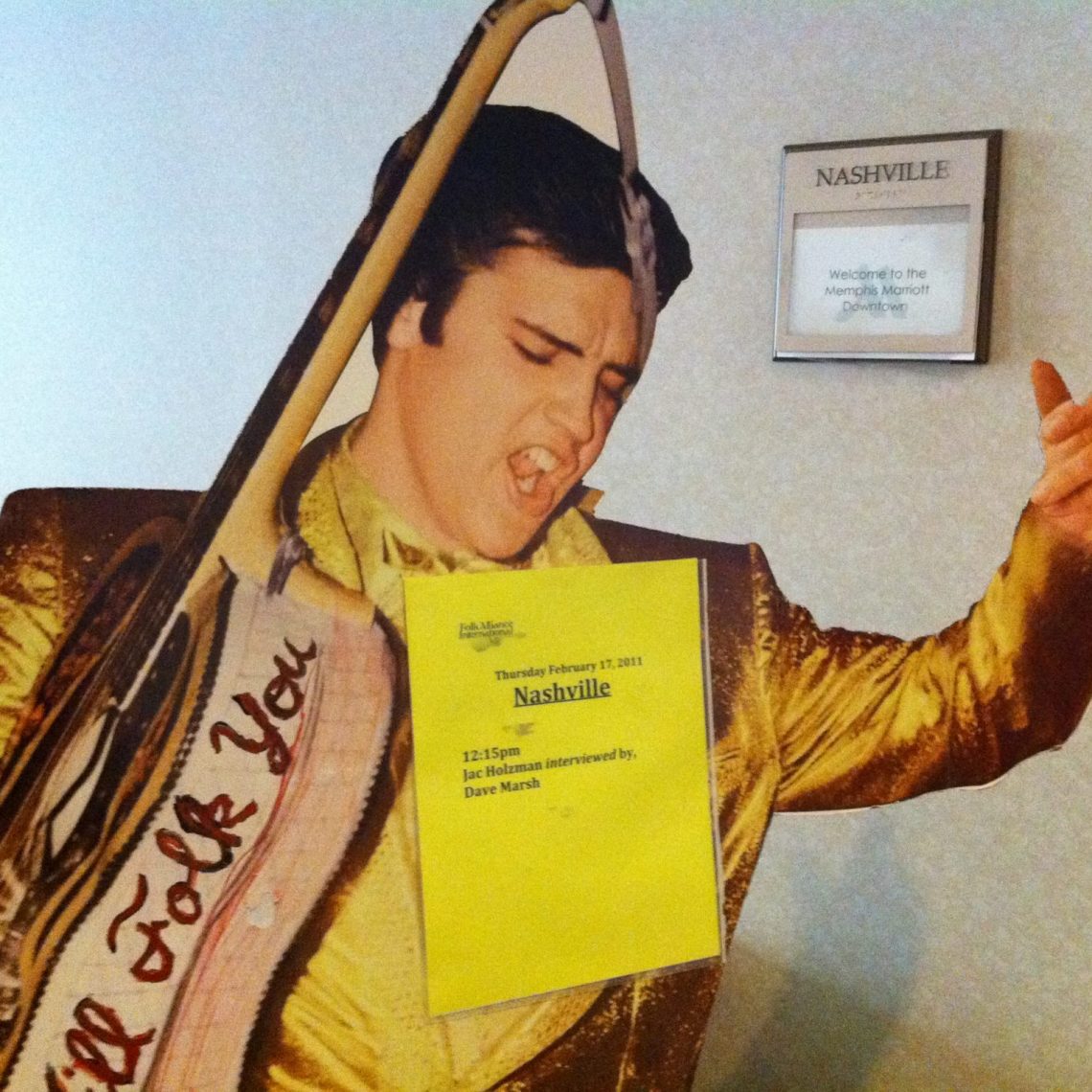 Elvis is in the building. (Photo by Richard Skanse)

It’s 2:30 a.m. Friday night/Saturday morning, and Susan Herndon is standing at the end of a hallway on the 18th floor of the Marriott Hotel in downtown Memphis, buzzed silly and looking for her next fix — song fix, that is. Lucky for her, songs are literally everywhere at the moment; the hallways of all top three floors of the hotel are choked end-to-end with similarly bleary eyed but insatiable addicts, armed to the teeth with banjos, fiddles, guitars, stand-up basses and ear-to-ear grins. Welcome to the 23rd International Folk Alliance Conference … after dark. 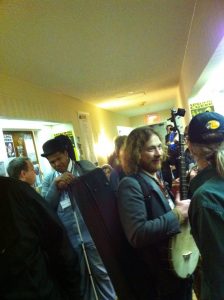 What a hotel infested with folkies looks like. (Photo by Richard Skanse)

“I’ve actually only been staying up to about 4 o’clock, so I’ve kind of been wimping out,” says Herndon, a singer-songwriter from Okemah, Okla. “Last year, on the very last night, we watched the sun come up.” She’s determined to go the distance tonight, though, even though she’s got a songwriting appointment scheduled early the next day in Nashville. An hour or so later, after watching fellow Okie John Fullbright jam with Gurf Morlix and Will Sexton in Sexton’s ultra-happening (and amplified) “Wine and Nut Room” on the 19th floor, she finds her way back to a more laid-back, acoustic song circle hosted by Peter Cooper and Eric Brace of Nashville’s Red Beet Records. When handed a guitar and asked to play a song, she answers with one called “Oklahoma Girl” that she co-wrote with John Hadley and Bob Livingston. Then she’s followed by a guy who has the gall to play, of all things, an Eagles cover (“Already Gone”) — but that’s a-ok with everybody, because this just happens to be the guy who wrote the song (Jack Tempchin).

It’s a cool scene, all right, and a surprisingly typical one at the IFAC. In addition to the late-night song-swaps and private showcases, the annual conference features four nights and three full days packed with featured (“official”) showcases, industry panels and even an awards show. The keynote speakers at this year’s conference (held Feb. 16-20) were Mark Olson (of the Jayhawks fame), David Bromberg and Elektra Records founder Jac Holzman, while the main showcases featured such Americana A-listers as Paul Thorn, Kevin Welch, Eliza Gilkyson, Sam Baker, Abigail Washburn and — direct from winning their Best Traditional Folk Album Grammy — the Carolina Chocolate Drops. But as executive director Louis Meyers is quick to stress, “We’re not a festival, because we pay no one. Everyone is treated exactly the same, whether you’re Suzy Bogguss, Mark Olson, David Bromberg or Joe Blow and the Blowholes from Erie, Pa.”

Registration is not restricted to Folk Alliance members or music industry insiders, but Meyers says that at least half of this year’s estimated 2,000 attendees were songwriters or performing musicians, with the other half comprised mostly of talent buyers, booking agents and managers — not to mention a handful of film and radio crews, including PBS’ Jammin at Hippie Jacks, XM15 Live, and about six different documentaries. “A crew was following me around all day for a film on the 25th anniversary of South By Southwest,” says Meyers, who was one of the founders of the Austin music festival, “and we kept passing other documentary crews in the hallway.”

This was the conference’s fifth year in a row in Memphis, after a 17-year run roaming from city to city. It’s confirmed for one more year in Memphis, followed by a visit to Canada in 2013, but host cities for 2014-2019 won’t be decided on until later this year. Regardless of where it goes, though, folkies are sure to follow. “Because we were nomadic for so long, we know that people will go pretty much anywhere,” Meyers says. “My first one was in Cleveland — in February. But there was almost a couple thousand people there, and it was enough to keep me coming back.”

Austin singer-songwriter Troy Campbell has been coming back for years, too. “I bet I’ve been to eight or nine of them,” Campbell says. “I never thought of myself as a folkie, but I would go just because people would tell me it was great, and now I’m a big fan.” This year, Campbell attended as an emissary for the House of Songs, an ongoing project teaming songwriters from the Austin area with writers from Denmark, Finland, Norway and beyond. A highlight at the House of Songs’ numerous showcases throughout the conference was Danish artist Ida Wenoee, whether performing solo or alongside Austin’s Matt the Electrician and Danny Malone.

Ostensibly, the conference serves as a trade show of sorts for songwriters, string bands, Celtic fiddlers, Americana bands and all manner of other “folk” acts to display and hopefully sell their musical wares to hundreds of different talent buyers, ranging from major festivals and performing arts series to house concerts. Management, booking agent and publishing deals are another carrot. But for many repeat attendees, the biggest draw is the camaraderie. 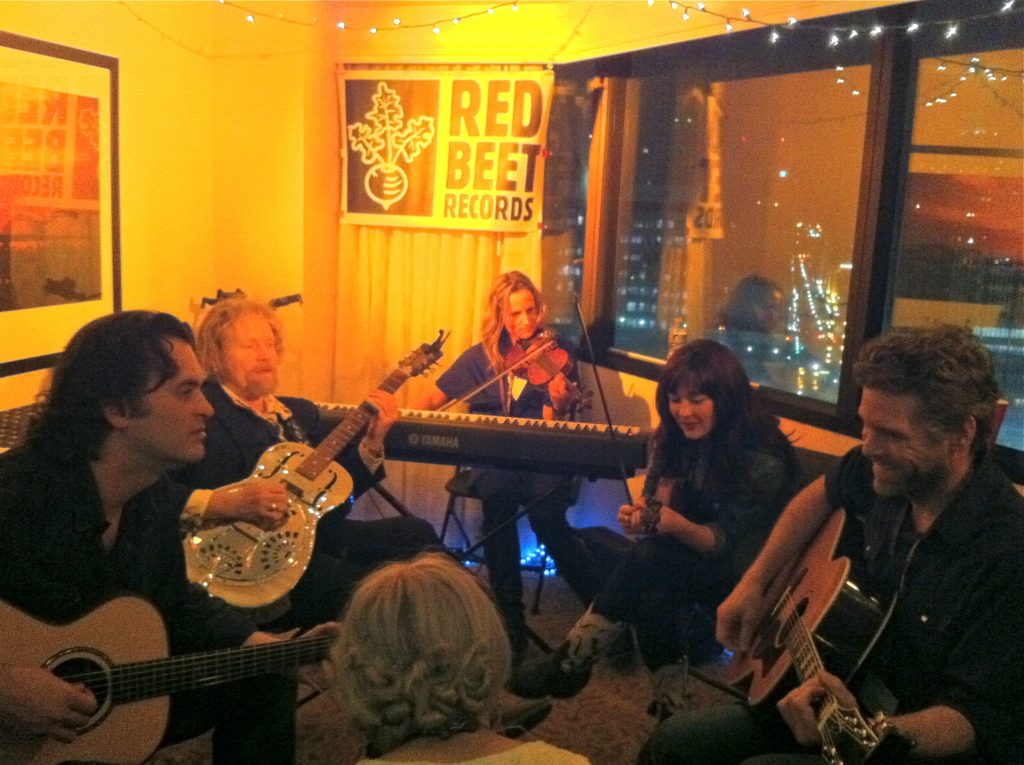 Rod Picott and Amanda Shires (at right) swap songs with Peter Cooper and Tom Mason (at left) and other friends in the Red Beet Records room. (Photo by Richard Skanse)

“I’ve been to Folk Alliance four times in the last 10 years, and I have gotten a few gigs out of it,” says Maine-born/Nashville-based singer-songwriter Rod Picott, who performed a handful of times throughout the conference accompanied by Texan Amanda Shires. “But I think the real value is reconnecting with your friends and people whose work you like. Because as a touring musician, you just don’t really cross paths with your peers that often. A lot of the time, you’re out there on your own.” 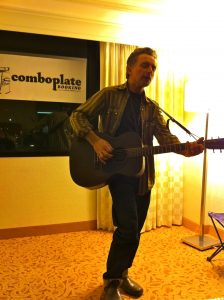 Then again, with so much music going on in so many rooms at once, sometimes you can be “out there on your own” even at Folk Alliance, and you’re left with nothing to play for but the sake of the song. A little after 12 a.m. on night two, just two hours after his official showcase downstairs, Michael Fracasso, one of the finest singer-songwriters in Austin (if not America), found himself in a little hotel room playing to an audience of one. Undeterred, he closed his eyes and played his absolute heart out through the title track to his forthcoming album, Saint Monday, his always exquisite “Chain Link Fence,” and what may very well have been the most visceral and chilling “Working Class Hero” since John Lennon primal screamed his way through the original recording 40 odd years ago.

“We’re all watching Sam Baker, Steve Poltz, Webb Wilder and Mark Olson in room 1812,” read the text from a friend that buzzed on my phone. “Where are you??”

Answer: Right down the hall in 1824, witnessing one of the best performances I’ve seen in my life.