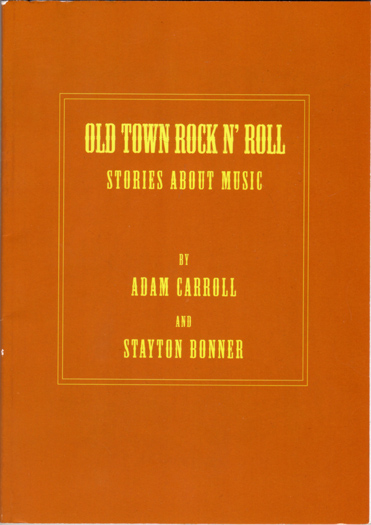 Twenty bucks might seem a bit steep for a wafer-thin paperback book of fun-sized short stories, even shorter, journal-type snapshots from the road and the odd poem or song lyric. And to be honest, it is; at 62 double-spaced pages (with a handful of cartoonish, black-and-white illustrations), Old Town Rock N’ Roll: Stories About Music is a quicker read than your average Reader’s Digest. But that little quibble aside, from a quality over quantity perspective, this collaboration between Texas songwriters Adam Carroll and Stayton Bonner is genuinely delightful. There are no co-writes here; Carroll and Bonner each contribute their own pieces, which are identified at the end by their respective initials. Read a handful of them, though, and you can tell straight away who wrote what. The entries by Carroll, the more seasoned songwriter of the two, all have the Texas beat-poet wit and almost Forrest-Gumpian wisdom of his best songs, with equal measures dry humor and a kind of bittersweet nostalgia couched in deceptively casual character sketches: “She was a waitress working right off the Flatonia exit on I-10. He was an old man who came in every day to drink coffee and look at her and scratch his old head.” Bonner, a songwriter/journalist (Texas Monthly, GQ, Outside) who previously wrote The Bookman, about writer Larry McMurtry’s side career as a rare book dealer, has an even sharper eye for details — sometimes maybe a little too sharp (“He opened the beer and took a long pull. It mixed with the cigarette and coffee residue stained on his gums.” Eww.) But overall, his vignettes are every bit as enjoyable as Carroll’s, with his “Playing for Tips,” a painfully funny account of a particularly grueling, thankless opening-act gig in the Forth Worth Stockyards, standing out as one of the book’s most engaging chapters. With writing that good, you really wish Carroll and Bonner had sat on Old Town Rock N’ Roll (which shares its title with Carroll’s last studio album) until they had twice as much material; not just to better justify its price tag, but because what’s here leaves you wanting more — in the best sense.