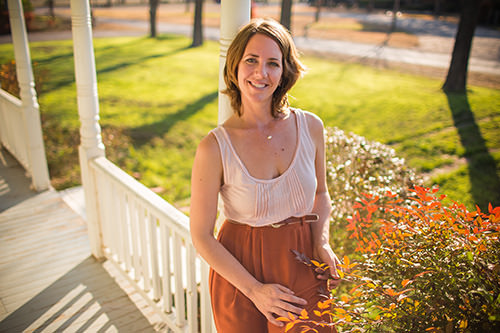 When the Trishas announced that they were all taking a little hiatus from touring and recording together a couple of years back, any initial feelings of “damn!” that fans of the beloved all-female Americana act might have felt were quickly assuaged by two encouraging certainties. First, of course, was the reassurance that the break was never officially a “break-up,” leaving the door wide open for future Trishas collaborations somewhere down the line (with more frequent, impromptu team-ups by at least two or three of the girls all but a given.) And second, “downtime” from the band could only mean more time for making solo records. Kelley Mickwee was first out of the gate in 2014 with her soulful You Used to Live Here EP (or in classic Trishas-parlance, “mini album”), and Jamie Lin Wilson followed soon after with her full-length Holidays & Wedding Rings, arguably one of the finest country albums to come out of Texas in 2015. (Wilson, of course, already had an EP under her belt, having released her six-song Dirty Blonde Hair back in 2010 before the Trishas took full flight.)

Since the release of Holidays & Wedding Rings last May, Wilson has been busier than ever, performing solo and with friends seemingly non-stop all across Texas and beyond. She also contributed a track to Dreamer: A Tribute to Kent Finlay (singing the late Cheatham Street Warehouse owner’s most famous song, “Hill Country”) — and, of course, reconvened with Trishas Mickwee, Savannah Welch, and Liz Foster (and official unofficial fifth member Brandy Zdan) for the band’s recent “Spring Fling” tour, which kicked off March 9 at the Woodlands’ Dosey Doe and wrapped four dates later at the Cactus Theater in Lubbock. This week finds her playing a whole mess of gigs all around Austin as part of the annual SXSW festivities, including kicking off Lone Star Music and KOKE-FM’s Dillo Mixer at Threadgill’s World Headquarters Friday at 11 a.m. Last Friday, we snagged Wilson for a quick, five-minute catch-up right after she finished singing a couple of songs at a book-reading/release party for Jenni Finlay and Brian T. Atkinson’s Kent Finlay, Dreamer: The Musical Legacy Behind Cheatham Street Warehouse at Superfly’s Lone Star Music Emporium in San Marcos — before she had zip down the road to get to her Trishas gig at Gruene Hall.

For starters, is this Trishas “Spring Fling” tour just a temporary break from being on a break, or the beginning of something more? And how quickly did it come together?

Basically, we just do one run a year, and the week before SXSW has always worked out well for us. We did it last year and then we planned to do it again. And then we just started booking gigs in the fall, putting feelers out there. We don’t really have an agent or anything anymore, so we just kind of do it ourselves, knowing that there’s just going to be like four or five shows.

After not playing together for awhile, does it take some time to get fully back into Trishas mode, or does everything seem to fall right back into place?

The shows do. This time we didn’t rehearse at all, except for Wednesday at souncheck for our Dosey Doe show, and we were like, “Oh, girl! We should have rehearsed!” You’d think it’d be like riding a bike, but then all of a sudden you’re in the middle of a song going, “Oh no, what happens in the bridge?” So the first show was a little rough, but last night in Dallas was awesome. It all comes back together pretty naturally. All of our parts just seem to happen; like, we’ll start singing and go, “Oh, that was my part!” It’ll just come out. So overall it’s pretty good. We’re really looking forward to tonight, because we’ll have a bass player with us — Jerry Abrams, who plays with Jason Eady.

You seem to have had a lot of success on your own since the release of Holidays & Wedding Rings. I know getting back to your solo career was something you’d wanted to do for awhile, but once you were out there on your own again, was there ever a moment of where you felt, “Oh oh, what have I done? I’m alone!”

No. I love it. I love playing gigs with the girls or with a band — I mean that’s like my second or third band, so I love bands. But it’s just nice to be solo and then come together with the Trishas every now and then. The logistics of it is great; it’s much easier whenever I’m by myself. And it’s cool because with my own shows, I can sing more personal songs. Like, it’s weird to make these really person songs “Trishas songs.” Kelley’s solo stuff is the same way, too. I feel like they’re just different sets of songs. So it’s a good chance to get to do those.

It’s been a year now. Do you have a new record on the way yet?

So you’re finally going to figure out how to do that? It’s about time!

[Laughs] Well I’ve never tried! It’s always just been like, [sings], “This is how I feeeeel …” But I’m starting now to go like, I’m going to try to do this, take some advice. Because actually the only songwriting teacher I ever had before was Kent, and he’s not here anymore. So Owen Temple and I are both taking this class. It’s online; there’s a website called Coursera.org, and you can take college class basically for free. This class we’re taking is like a Berklee professor’s songwriter class, and you watch videos and do assignments.

Have you learned any big secrets yet?

It actually just started, like last week. Tuesday will be the second class.

So when will you start recording a new album? Do you have a release date in mind yet?

Next post The Quaker City Night Hawks’ time is nigh