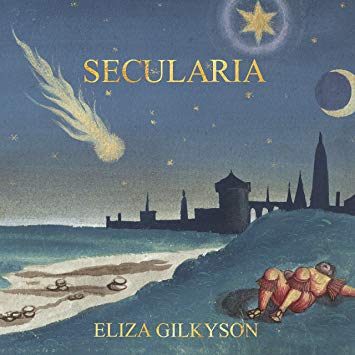 ELIZA GILKYSON
Secularia
Red House Records
Just shy of 20 years into her remarkable second act (2000 being the year that she rebooted her career, at age 50, with the release of her watershed eighth album, Hard Times in Babylon), Eliza Gilkyson remains not just at the top of her game, but the veritable Dame Judi Dench of contemporary folk. Others in her field may invariably garner more popular acclaim, but Gilkyson is the gold standard they would all do well to aspire to; as both a songwriter and singer, she is a paragon of poetic grace, burnished integrity, and eloquent ferocity. All of those qualities burn brighter than ever on her latest, lighting Secularia from within with a warm glow as surreally serene as the album’s cover, an illustration lifted from a 16th-century German tome on supernatural miracles. But although spirituality is indeed Gilkyson’s primary theme here, it’s not the airy-fairy, “Calling All Angels” variety she dabbled with back in her ’80s New Age spell; as its title suggests, Secularia is instead a collection of agnostic hymns inspired by the more earthly but no less mysterious nature — both praiseworthy and damnable — of the human spirit. Not that this is uncharted territory for Gilkyson; although all of the recordings here are new, many of the songs were actually culled from throughout her deep back catalog, including the stunning opener, “Solitary Singer” (a song co-written by her folk legend father, Terry Gilkyson, and grandmother, Phoebe Gilkyson, that she first recorded for her 1996 album, Redemption Road). But the thematic and musical stitching of old and new is seamless, with hauntingly gorgeous production (by Gilkyson’s son, Cisco Ryder Gilliland) that gives the entire album the feel of a deep dream you don’t want to wake from, even when it blurs in and out of the realm of lucid nightmare with lines like “we watch the Empire’s epic fail on shiny hand-held screens” (from “In the Name of the Lord”). Gilkyson’s propensity for writing songs about her “dread of the future, illuminated by the beauty of each moment” has rarely been brought into sharper focus, though at times the only beauty on hand to work with seems to be that of the music itself. In “Lifelines,” she gilds the gut punch of election night 2016 by noting the reassurance of like-minded friends turning “to each other on the night of the Supermoon,” shaken but stirred to action to “light our way home in the dark.” But “Reunion,” a heart-wrenching eulogy for 26 young Nigerian women found drowned in the Mediterranean two years ago, offers no such silverlining to assuage the horror — just the tender mercy of Gilkyson’s empathetic vocal and the mournful undertow of the Tosca String Quartet. And yet, come the closing benediction of “Instrument,” in which Gilkyson both acknowledges and embraces the dominion of time over fleeting mortal life, it’s beauty that ultimately prevails — suggesting that no matter how hard comfort, hope and answers may be to come by when angels are taken out of the equation, catharsis and resilience needn’t be dependent on a deus ex machina. — RICHARD SKANSE

Previous post Jason Isbell and the 400 Unit: "Live From the Ryman"