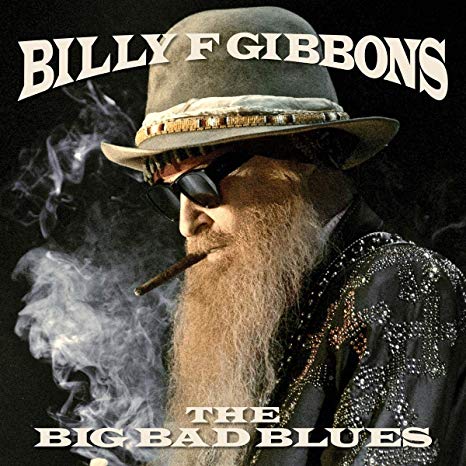 BILLY F GIBBONS
The Big Bad Blues
Concord Records
As the main man behind the wheel of ZZ Top, Billy F Gibbons has enjoyed no shortage of commercial and at times even critical success over the course of the last half century. He’s a bona fide rock ’n’ roll legend and a pop culture icon to boot, arguably the most instantly recognizable Texas music export this side of Willie. In short, he’s long past the point of needing to hustle just to keep the lights on. So anytime Gibbons feels inclined to make a new record or even play onstage at this point in his career, odds are it’s just for the fun of it. And although ZZ Top still tours fairly regularly and he remains as simpatico as ever with Dusty Hill and Frank Beard (the band just announced its three city “50th Anniversary Texas Bash” celebration coming to Dallas, Houston, and Austin in May), the fact that he’s now released two solo albums in the wake of the Top’s last album, 2012’s La Futura, suggests that even at 69, Gibbons likes having more fun these days than even the biggest lil’ ol’ band from Texas can hold. As was the case with his first stab at a kind-of-unexpected solo album, 2015’s Perfectamundo, there’s not a huge stray from ZZ Top’s amped-up boogie and tequila-spiked Delta blues on The Big Bad Blues — just a touch more harmonica, a couple of solid Muddy Waters covers (“Standing Around Crying” and “Rollin’ and Tumblin’”), and, at the very end, a glorious bit of Latin-tinged classic pop (“Crackin’ Up”). But even when mining territory as tried-and-true as the album-opening rumble “Missin’ Yo’ Kissin’” (arguably the most ZZ Top sounding jam and song title ever), he invests every note with an all-in vigor that’s hard not to admire — or a the very least just want to crank loud enough to rattle the windows. For a guy with seemingly nothing left to prove, Gibbons nevertheless reminds with The Big Bad Blues why he’s perhaps underrated even in his fame: In upper echelon of classic rockers still willing and able to put forth something new, few make the effort sound and feel like such a blast. — MIKE ETHAN MESSICK