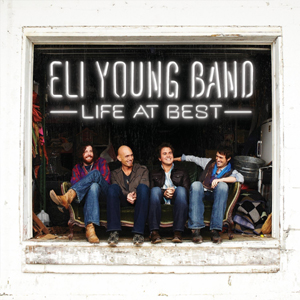 With fourth album Life at Best, their first in three long years, Denton’s Eli Young Band seems to be getting the best of life. Their transition from an indie to a major label worked out pretty well on 2008’s occasionally uneven Jet Black and Jealous, which charted four singles nationally, including the Top 20 hit “Always the Love Songs.” The new album’s “Crazy Girl,” a clever spin on the classic country double entendre tradition (from the prolific pens of Lee Brice and Liz Rose), is already a huge hit with 615,000 in digital sales and counting, earning the band its first gold record award. Clearly, Nashville and producers Frank Liddell (who exec produces here) and Mike Wrucke (who’s behind the board) have been good to these four University of North Texas buds, whose new album is their best, and most reflective yet. The album gets some A-list contributions from some A-list songsmiths, most notably the aforementioned “Crazy Girl” and Will Hoge and Eric Paslay’s “Even If It Breaks Your Heart,” a confessional about musical dreams and the toll they can exact. It sets the tone for an album that effectively navigates the joys and perils of a crazy life in the music game. But the band members, particularly singer-guitarist Mike Eli, have developed into accomplished songwriters themselves. Eli’s haunting, minor key “Skeletons” tries to atone for past sins, “My Old Man” makes no apologies about who he takes after and the closing title track puts their past few years into clear-eyed perspective. “You gotta make it there and then maintain,” Eli sings, something this rising band seems well-positioned to do. — DOUG PULLEN

Previous post Micky and The Motorcars: "Raise My Glass"