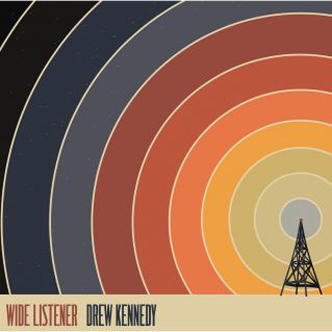 “I love hearing songs that are intelligent, thought provoking, and honest,” offers Drew Kennedy in his self-penned bio on his website. He writes songs to match, too, reliably turning out albums like Wide Listener (his sixth) that demand and reward acute attention to every word. This is very much a sit back (or lay down) and listen kind of record, impeccably played and sung (both by Kennedy, a dead ringer at times for Bruce Robison, and harmony helpers Kelley Mickwee and Brandy Zdan) and filled with languid melodies more comfortable than outright catchy. Still, pretty much every track here is a sleeping beauty akin to the patient desert succulent that inspired the exquisite “Rose of Jericho” (one of two songs Kennedy co-wrote with Lori McKenna).And when Kennedy does pick up the tempo a bit, as on the opening “Age of Color” and “Love on the Highway,” the effect is genuinely refreshing. The biggest surprise of all, though, comes with “Jesus Can See You,” coiled like a snake at the heart of the record and striking with an out-of-nowhere guitar solo as loaded with bitter venom as the song’s gotcha lyric: “Jesus can see you/breaking my heart.” It’s a jarring (but not unwelcome) twist in the middle of an otherwise gently measured and deeply reflective record, but like every other song on Wide Listener, it rings honest and true of heart. — RICHARD SKANSE