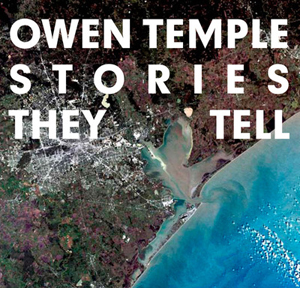 Kerrville-born Owen Temple has been a mostly under-the-radar journeyman on the Texas songwriter scene for more than a decade now, debuting with his Lloyd Maines-produced General Store way back in 1997. He’s made a handful of assured and modestly successful records since then, and even demonstrated a keen sense of satirical humor channeling the legend of one “Gary Floater” alongside frequent running buddy and co-writer Adam Carroll. But Stories They Tell, his seventh album, is the one that should finally earn Temple a seat at the table next to the best Texas/Americana troubadours of his generation. He’s always had a great voice for the medium, but it’s never sounded better than it does here: as rich, warm and comforting as Don Williams and as dry, worn and wizened as Townes Van Zandt. The production, by Gabriel Rhodes, is equally earthy and inviting, leaving plenty of room for every instrument and note to breathe. But best of all are the songs. Every one of them is a keeper, but some — like the Temple/Carroll/A.J. Roach co-write “Johnson Grass,” a vivid and fairly balanced character study of a Kerrville-Folk-Fest-attending, long-hair-growing, post-presidency Lyndon B. Johnson — have the feel of instant classics. In the terrific “Make Something,” a Ray Wylie Hubbard-worthy call to creative arms, Temple makes his go-for-broke intentions patently clear: “If you want to live forever, better make something, man.” With Stories They Tell, this man has just made the best record of his career. — RICHARD SKANSE