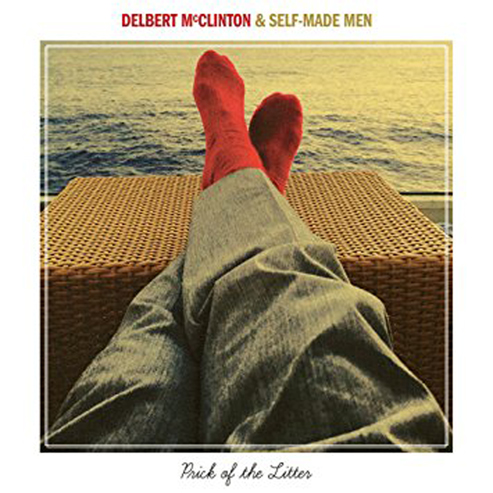 “Listen up … I got news for you / You got to find a way to lose your blues, and everything will be rosy.”

Let’s be honest here. Coming from most people, a line like that would generally warrant a sincere “no shit, Sherlock.” But when Delbert McClinton lays it on you in “Rosy,” the closing track on his new album, damned if he doesn’t make it sound like the kind of sage advice worth taking to heart. That’s because McClinton just has that air about him of a guy who has everything pretty much all figured out. Oh sure, he’s still a bit vague there on the details: “I don’t have the answer …,” he admits upfront with a casual shrug, as if to say how you choose to lose your blues is none of his business. Just take his word for it that once you do get that sorted — man, it’s all good.

Of course, there’s blues, and then there’s the blues, and Delbert knows from both. You can bet he’s had his fair share of the former over the course of his 76 years, but he also figured out early on that the latter, when played and sang just right, can earn a Lubbock-born, Fort Worth-raised hard-working hustler with a mean aptitude for blowing harp a pretty damn good living. And a “rosy” one, too, judging from his ocean view on the cover of Prick of the Litter — a shot no doubt snapped somewhere in the Caribbean during one of his annual “Sandy Beaches” cruise-ship festivals at sea. So when McClinton sings about giving up the blues, rest assured he doesn’t literally mean the kind that butters his bread. That said, though, Prick of the Litter may well be the farthest he’s ever stylistically sailed from his Jacksboro Highway roots. McClinton has always mixed equal measures progressive honky-tonk, rock ’n’ roll, and meaty blue-eyed soul into his own brand of rhythm ’n’ blues, but his first solo album since 2009’s Acquired Taste finds him stepping out of the roadhouse and sliding confidently into the Jekyll and Hyde dual role of rakishly debonair big band crooner and smoky cocktail lounge jazz cat. And it all fits him like a custom-tailored velvet jacket.

Not surprisingly, a lot of that perfect fit has to do with McClinton’s grit-n-honey golden throat — arguably the finest of its kind to ever roll out of West Texas. Apart from on the aptly titled “Middle of Nowhere,” which finds him reaching for the kind of weary, dusty falsetto that instantly evokes every Eagles slow jam you’ve ever grown sick of,  his voice sounds as strong and full of one-of-a-kind character as ever. And the same goes for the material. McClinton may not be the first rocker to ever flirt with singing this kind of stuff, but rather than take the standard, Rod Stewart-paved route of just mining the Great American Songbook, almost every song on Prick of the Litter is brand new and homemade. Not counting “Jones for You,” written by guest trumpet player Tim Ouimette, the only outside cover here is Percy Mayfield’s “The Hunt is On.” McClinton himself wrote or co-wrote the remaining 10 tunes, many with members of his own road band, Self-Made Men, and three with his old duet partner Glen Clark — left overs, perhaps, from their delightfully spry 2013 reunion album, Blind, Crippled and Crazy. And although none of the originals here quite measure up to his personal best (not just ’70s classics like “Two More Bottles of Wine” and “Victim of Life’s Circumstances,” but really any of the many gems he’s polished off since 2001’s Grammy-winning Nothing Personal), they’re all delightfully Delbert in wit and sentiment. The lovely “San Miguel” is an earnest love letter to his wife and favorite (well, land-locked, at least) getaway south of the border, while the closing time lament “Pullin’ the Strings” finds him drolly noting “I’m goin’ nowhere, but I’m makin’ good time.” Then there’s the bounty hunter in the vivid character study “Skip Chaser,” who heads out to work each morning with hot donuts on his mind and pliers in his pocket: “I got some nuts to crack,” he explains, “hope they ain’t mine.”

It’s also worth noting that, crooning and all that jazz aside, there’s still plenty of that trademark McClinton swagger and groove here to keep butts wiggling. The opening “Don’t Do It” kicks things off with a blast of brass, but guest guitarist Jimmie Vaughan injects it with a Texas-sized dose of T-Bone Walker upscale blues and Lou Ann Barton chases it with a double shot of sass. The aforementioned “Skip Chaser,” meanwhile, is as rollicking as any certified roof-shaker in his decades-spanning repertoire. And even though McClinton’s harmonica is almost entirely absent from the mix, he does bust it out to blow a few choice bars in the terrific “Doin’ What You Do” — one of two songs here (the other being the sly, funky “Neva”) that evokes vintage Steely Dan at their absolute best, just as the equally wry “Bad Haircut” does a more rough-and-tumble Randy Newman. But make no mistake: Prick of the Litter is above all else Delbert McClinton through and through, and if that alone ain’t quite enough to help you lose your blues, it’s as good a place to start as any. — RICHARD SKANSE