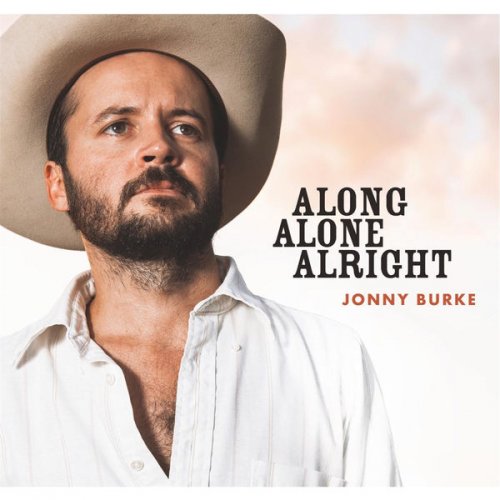 Jonny Burke has been building his already-impressive catalog for a stunningly long amount of time considering that he’s still a couple decades shy of what anyone would consider middle age. Starting with some early acclaim as co-frontman of the much-lauded Dedringers while still in his teens, he’s shown a precocious grasp of the thread of melancholy and decadence that runs through the at-a-glance disparate legacies of Townes Van Zandt and the Rolling Stones.  Well, at this point “precocious” isn’t really a fair description of the fully-grown Burke; three full-length albums (not counting that Dedringers stunner), a couple EP’s and likely a few thousand gigs into his career, he’s very much in his creative prime on the new Along Alone Alright.

Burke has been a favorite collaborator of Hayes Carll and the Turnpike Troubadours, among others, and left to his own devices his style hews closer to the wordy but off-the-cuff charm of the former. He’s not one to hold a note for too long; his fairly plainspoken voice is a good fit for his prolific pen though, rattling off details of a heartbroken present spiked with flashes of the wilder romantic nights that got Burke (or at least his often world-weary song narrators) there when the magic wore off. He’s a good hand at poetic turns of phrase (“like a mockingbird I sing my song/stole outright and played all wrong”), but he also leans pretty often on a refreshing frankness. A couple of no-big-deal f-bombs and ruminations on a lost lover that “never wore no panties/and you hardly wore a bra” aren’t meant to shock or scandalize some innocent listener that stumbles across them; that’s just how folks talk, especially when they’re well-traveled young musicians with a story to tell and not much inclination to hold back.

Produced by American Aquarium’s Ryan Johnson and Whit Wright, the stripped-down but well-considered music is up to speed with Burke’s strengths, framing his alternately woozy and scrappy lyrics without overwhelming them. Often some gauzy acoustics are plenty — “The Great Beyond,” “Funerals and Weddings,” etc. — but there’s some pretty fetching change-ups too. The fevered vocals of “Hooks” seem almost out-of-place over the languid blues guitar until a groove kicks in halfway through that gives it the Stonesy snarl that was implied from the start. Even better is the earthy, slippery bounce of “Rent’s Gettin’ Bigger,” as close to an all-out house-rocker as Burke is offering up here. Most of the charms are pretty low-key this time around, but with a stick-to-your-ribs quality that lasts well after the record shuts off. It’s arguably the best work of his still-young career, and certainly among the best this still-young year has to offer. — MIKE ETHAN MESSICK

Next post DELBERT McCLINTON & SELF-MADE MEN: "Prick of the Litter"