Dale Watson: “Under the Influence” 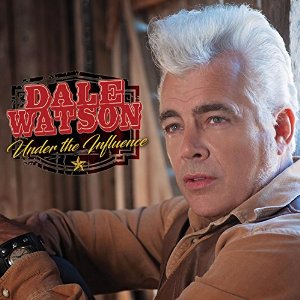 Austin honky-tonker Dale Watson has always been outspoken about the artists he admires, so it’s really no surprise to hear him sounding so very much at home and fully invested on this album of cover tunes celebrating some of his biggest inspirations. And given his reputation as a veritable human jukebox or walking encyclopedia of classic country, it’s also no surprise that he’d dig deep. You won’t find many “hits” on Under the Influence, but there are plenty of expertly curated gems that showcase both the songwriting range of Watson’s heroes as well as his own impressive chops as a duly reverent yet clever interpreter. Take, for example, his bold pick from the Merle Haggard litter, “If You Wanna Be My Woman.” That’s already arguably the most overtly sexual song that the Hag ever wrote — and Watson actually intensifies its erotic flair with a playful vocal, accented by a couple of lascivious chuckles. Ronnie Milsap’s “Pure Love” is at the opposite end of the spectrum; it’s a celebration of domestic bliss that’s almost surrealistic, but it’s brought back to earth by Watson’s weathered delivery and the band’s punchy arrangement. “Lonely Blue Boy,” an early Conway Twitty tune, transports the listener back to the ’50s via Watson’s soulful lead vocals and band harmonies that echo the Jordanaires. For “Long Black Veil,” the usual somber approach is jettisoned in favor of a swing arrangement with a sprightly pedal steel solo from Don Pawlak. Elsewhere, Watson and the band show off their smoky honky-tonk soul on “Pretty Red Wine,” a Mel Tillis salute to self destruction, Roy Head’s “Most Wanted Woman in Town,” and the Bob Wills classic “That’s What I Like About the South,” with Watson delivering a rhythmic guitar solo that recalls Eldon Shamblin. By bringing these oldies into exciting new territory without ever really compromising the spirit of the originals, Watson does his influences proud — all the while showing off, once again, the timeless appeal of a good country song. — J. POET

Next post Drive-By Truckers: An American Band with a mission