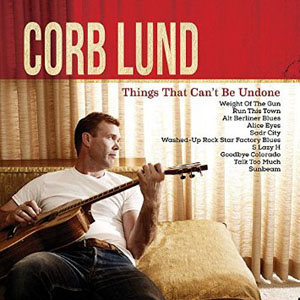 Corb Lund has been one of Canada’s top country performers for more than two decades. But as most of his fans — including many an Americana lover south of the border — can attest, calling Lund “country” is a bit limiting for the kind of literary, thoughtful and often rockin’ tunes he writes and performs with his band, the Hurtin’ Albertans. Things That Can’t Be Done, his tenth album, is full of the surprises those fans have come to love.

The album kicks off with “Weight of the Gun,” a cowboy song that tips its hat to Merle Haggard and the sounds of Motown in the ’60s. Lund’s voice comfortably rides the syncopated Motown beat while asking mama to forgive his transgressions. “Alt Berliner Blues” is a jumping country blues driven by the wailing guitar of Grant Siemans. Lund decries the wave of gentrification that’s replaced his favorite German dive bar with a stack of high priced condos.

Lund borrows a bit of the melody and some lyrics from Johnny Paycheck’s “Take This Job and Shove It” and turns them inside out on “Washed Up Rock Star Factory Blues.” Siemans adds a few Roy Nichols-like licks to spice things up as Lund delivers a tongue-in-cheek take of a superstar reduced to sweeping the floors in a factory. “Talk Too Much” is a snide country rocker telling off a drunken oaf who thinks waving a gun around is going to get him some respect.

Lund switches gears on the album’s last song, “Sunbeam,” a traditional sounding country tune dedicated to a young niece that died suddenly. It opens with fragile vocal from Lund, accompanied only by spare strummed guitar chords. The band lays back to give the song the solemn vibe it deserves, showing just how well Lund can put over a heart wrenching lyric when he wants to. — j. poet