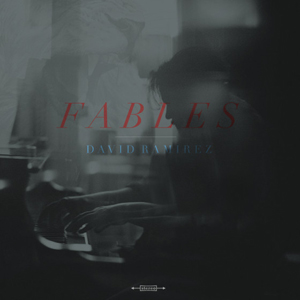 Austin’s David Ramirez is known for his brutally honest songwriting style and willingness to drop down into the depths of pain, sorrow and suffering. He continues that journey on Fables, with 10 more tunes soaked in loneliness, heartache and alienation. Although it may be a somewhat lazy critical conceit to liken a collection of songs to a novel or a film, it’s an apt metaphor for Fables. It’s a trip into the shadowy, emotional noir world of a man who walks through the world alone and lonely, not knowing if it’s a path he’s chosen or a path that’s the result of a lot of poor choices.

The opening track, “Communion,” uses the sacrament as a symbol for all the things that seem to promise transubstantiation, while delivering more of the same aching isolation. Its twangy distorted guitars, icy pedal steel and the singer’s hopeless baritone set you up for the gloomy, atmospheric tunes that follow. “Harder to Lie” features ambient acoustic guitar and a quiet vocal in which Ramirez confesses that he’s willing to tell any lie he can think of to get close to a woman as he slowly realizes that he is, in fact, falling in love. He meditates on death on “Rock and a Hard Place,” looking at the hard life he’s led and coming to terms with the inevitable with a painful resignation to his own limitations.

The somber tempo picks up near the end of the album, but the messages stay the same despite the spritely rhythms. “That Ain’t Love” describes a flirty woman teasing men and leaving them flat when they respond to her come on. Between the lines, it’s Ramirez telling his audience that the man in the songs isn’t going to give them anything but his music before he hits the road. The singer desperately asks for unconditional love on “Hold On,” while admitting that he’s “walking the line between cocaine and communion wine,” doomed no mater which choice he makes.

That’s a lot of bleakness for one record, with really no trace of any uplifting relief to be found. And yet, the cumulative effect of Fables is strangely bracing. It’s as if you’ve stood on the edge of the cliff and suddenly achieved a strange state of grace and decided that life is indeed worth living, despite the uncomfortable truths you’ve been facing. — j. poet