Cooder Graw: “Love to Live By” 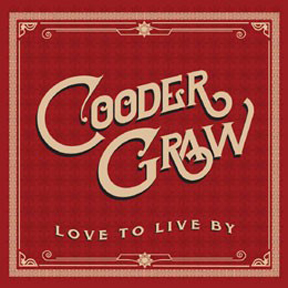 In the past year or so, new records from many of the artists originally responsible for making so-called Texas Country seemingly as popular as mainstream country have finally seen the light of day. Pat Green, Dub Miller, and Cory Morrow all returned from lengthy recording breaks to remind audiences both loyal and young of their glory days, and we can now add the Cooder Graw to the comeback roll call. Love to Live By, their new EP and first release since 2004’s Wake Up, finds the reunited Amarillo band confidently returning to the Texas highways and stages hellbent on pumping a bit of fresh blood into a sound that remains distinctive almost two decades after it originally formed.

With the EP’s six tunes running only a bit over 20 minutes, Matt Matindale and crew have precious few moments to reassert themselves in a manner that warrants a comeback we should care about. Such a limitation on time isn’t an issue, however, since Martindale’s low and slow vocal tone remains as immediately identifiable as it was so many years ago when it was famously — and quite often — heard blaring over an action-packed truck commercial. The band hasn’t necessarily reinvented itself, but growth is clearly evident. “Hello from Hell,’” the opening track, is a Tex-Mex flavored two-stepper perfectly suited to Martindale’s witty writing and dusky drawl. The group has long had a knack for unconventional storytelling without veering into simple silliness. That gift is heard well in “Virginia Slims and Little Kings,” an up-tempo number that begins a bit herky-jerky only to capably boil into a rollicking Rolling Stones-esque example of how Cooder Graw hasn’t lost its keen versatility.

The most obvious audible growth can be heard in the two love songs, “Love to Live By” and “Adam and Eve.” The striking title track offers up outlaw-tinted, pedal steel-kissed balladry that can cut through the smelly fog of honky-tonk smoke and retain its sweetness without yielding grit. As much as anything else here, the way in which this small collection successfully feels familiar without sounding stale is a triumph and a trick that often only the best older road dogs can pull off. — KELLY DEARMORE