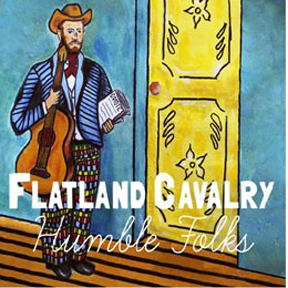 The new record from Lubbock-based Flatland Cavalry, Humble Folks, is a well-seasoned, mature mission statement from a band that plays far wiser than the relatively young age of its members would typically suggest. Hints of smooth country soul, front-porch roots and many skillful lessons in how simplicity can be profound make this album likely the finest full-length debut 2016 will see. It’s not that its high quality is a total shock, mind you. The Cleto Cordero-led band released an EP, Come May, in 2015, and even in the small sample provided, the songs were strong enough to signal the arrival of a group ready for prime time.

When taken as a complete work, Humble Folks is very clearly a representation of a band that’s confident in its independence and charting its own path. But when you tear the tunes away from one another in order to more closely inspect the record’s musical DNA, some favorable comparisons easily come to mind, though none of them define the five-piece outfit as a clone of any sort. The expertly employed fiddle and well-placed electric guitar in “A Good Morning,” “Stomping Ground,” and “Traveler’s Song,” bring to mind the mellow gold Turnpike Troubadours have become famous for, and Cordero’s effortlessly smooth, soulful tone displays dashes of Adam Hood, and yes, Evan Felker. His dusty delivery is warm and welcomes any who listen to huddle in close around the backyard fire pit many of these tunes were surely written around.

Humble Folks carries a regional specificity that endears rather than panders. Songs such as “February Snow,” and “Tall City Blues” offer a distinctive blend of twangy, jangly country that rocks just enough to either dance to or to hoist your double-fisted beers to. Even more importantly, “Tall City Blues” offers a true-to-life landscape only a gifted artist can provide. When Cordero sings “I’m a CPA, I got my BBA from TTU,” we see a colorful vista far more vivid than the desolate, cracked Lubbock horizon often offers, though it feels real none the less.

The greatest sign of Flatland Cavalry’s maturity lies in the many moments where a less-is-more approach yields gorgeous results. With a ribbon-like fiddle giving way to a clean acoustic guitar, “Goodbye Kiss” is an impactful slow-burning number where everyone fills an individual role not to shine alone, but to soar collectively. At every turn, the record feels intimately Texan without ever adhering to a formulaic Texas country template. Humble Folks is a fine way for a young band to make its presence known. — KELLY DEARMORE