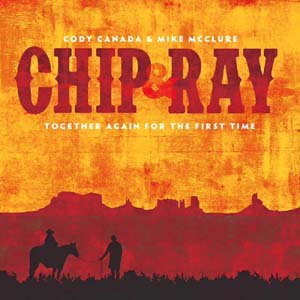 We’re not sure what took so long for Cody Canada and Mike McClure, longtime buddies and collaborators as well as modern ambassadors of the Okie-flavored Red Dirt style of country songwriting, to get around to releasing an album together. But after a combined two-dozen albums between them, Chip and Ray: Together Again For the First Time, is an outstanding double album packed with acoustic renderings of songs close to each troubadour’s heart.

This “Are You Sure They Haven’t Made an Album Together Before?” project was recorded at Port Aransas’ Third Coast Music in front of a fun-loving, chatty gathering of friends and longtime admirers. The 35 songs between the two discs roll out a never-dull, latter-day history lesson of Red Dirt music. Each artist ignored hit singles, added an abundance of songs from key influences, and offered up deep cuts from both of their seminal, beloved bands. Given Canada’s love of groundbreaking band Nirvana, this album impressively, perhaps unsurprisingly, carries the soul of arguably the greatest acoustic record of the past quarter century. Nirvana’s monumental 1994 album, MTV Unplugged In New York, only threw a few popular bones to the crowd while Cobain and crew gave millions of devotees’ reconfigurations of lesser-known Nirvana songs and covers of influential tunes. Chip and Ray certainly has a more joyful tone than Nirvana’s Unplugged, but the vulnerability and the heavy tilt towards familial and spiritual themes carries a gravity that can’t be forced, even when Canada and McClure are joking and provoking the jovial audience.

Unlike this year’s celebrated Randy Rogers and Wade Bowen duet record, this album doesn’t contain any new tunes, nor any true duets for that matter; it just happens to be two scene-defining artists taking turns telling their respective stories. Of course, the acoustic styling and the location of the recording is the same as Canada’s 2013 solo debut, Some Old, Some New, Maybe a Cover or Two. On that record, as is the case here in several instances, Canada’s vocals are strained and weary, which is obvious during a hilarious alternate version of Ragweed’s “The Years.” The spontaneous laughs of McClure, mixed with the crystal clear, raw-boned guitar strums and Canada’s admirable vocal soldiering could be applied to a reading of a Panda Express menu and it would ooze familiarity, authenticity, and soul. As fans, it’s natural to want our artists to be the best of friends — like Waylon, Willie, and the boys — and as evidenced by the palpable camaraderie, Canada and McClure are super-tight, propelling this album along with a swift pleasantness.

Of the many revelations here, a trio of tunes from Cross Canadian Ragweed’s 2004 album, Soul Gravy offers a stellar bit of then-and-now style perspective. Given the stripped-down treatment, “Lonely Girl,” and “Leave Me Alone,” are both stunning in how well each morphs from mellow Southern rock to the vulnerable folk style apparent here. And while the version of “Pay” here isn’t really that different from the original, there’s something about the starkness of the performance that hammers its tragic message home with extra profundity.

For the vast majority of the album, the guys alternate between songs. And it becomes apparent early on that when McClure takes his turn on the mic, he’s there to share his love of three things: his family (see: “Pink, OK,” “Lucky Man,” and “Hung Down Head,” a duet with his daughter, Marleigh); his faith (see: “Between Two Thieves,”); and his late friend, Tom Skinner. A handful of McClure’s tunes here were songs written with the revered Oklahoma troubadour, who died this past July. The live setting and casually loose delivery of the artists allows songs such as “Ashes and Dust,” and “Used to Be” to become proper, loving odes to the man McClure, Canada, and so many others credit as a founding father of the Red Dirt way of making music.

Bottom line: here’s hoping “Chip” and “Ray” get together again, and sooner rather than later. — KELLY DEARMORE