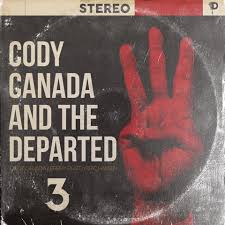 CODY CANADA & THE DEPARTED
3
Underground Sound
Confusing as it may seem for Cody Canada & the Departed to have titled their fifth release 3, the math here actually checks out — and not just because they issued the album with three different covers. If one rules out both 2012’s Adventus on account of it being credited to just the Departed (that being back when Canada shared frontman/lead-guitarist duties with former member Seth James) and 2016’s In Retrospect (a country covers detour billed as a “Jeremy Plato & the Departed” joint), then 3 really is only the third Cody Canada & the Departed album officially released under that handle. Most pertinent of all, though, is the fact that the Mike McClure-produced 3 is the first proper document of the band as a pared-down classic power trio: Canada, bassist Plato, and drummer Eric Hansen (the band’s third to date, but with three years — hey, more three’s! — already under his belt). Of course there are some guests in the mix, too (most notably Robert Earl Keen, who duets on a cover of Merle Haggard’s “Footlights”), but from start to finish this is the leanest and meanest sounding Departed album yet — and arguably the band’s most focused since their 2011 debut, This is Indian Land. As was the case with 2015’s HippieLovePunk, putting the spotlight back on Canada’s distinctive voice and guitar evokes the heyday of Cross Canadian Ragweed, but his songwriting has matured immeasurably. Sure, the Oklahoma boy he was back then always had a knack for hooky rockers and radio-ready Red Dirt anthems; but the 20-something kid who wrote “17” would have been way out of his league matched against the 42-year-old grown-ass man heard here, as utterly convincing singing a beautiful, road-weary original lament like “1800 Miles” as he is throwing down the funkiest licks of his life covering Todd Snider’s “Betty was Black (Willie was White).” — RICHARD SKANSE

Next post Jason Isbell and the 400 Unit: "Live From the Ryman"