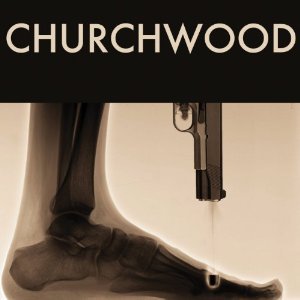 Dense and nasty, literate and mean, Austin’s Churchwood sounds like Captain Beefheart trying to cut Tom Waits’ throat with a rusty harmonica. From the opening crash-and-clash of the Beefheartian “Pontiac Flanagan,” twin guitars mesh and work off each other like long-time lovers pushing all the right buttons. Dangerous, foreboding, in-your-face tracks like “Vendidi Fumar (I Smell Smoke),” “Melungeon in the Dungeon,” and “Supermonisticgnostiphistic” put an evil new twist on blues-rock that takes the music far beyond the too-common Stevie Ray mega-solo blues-jam template. Theatrical and sociopathic, Churchwood swaggers mightily on punch-you-in-face tracks like “Pity the Noose” (“if you see me hangin’ don’t you cut me loose/just pity the noose”). Lyrically there isn’t a weak or clichéd moment in this amazing set of music that sounds like the future meeting the past, especially when these Austin veterans riff off Tom Waits on “Abraxas” and boogie through a stinging French-language interpretation of Bo Diddley’s eponymous signature (renamed “Rimbaud Diddley”). This is a powerful, unique rock record that stings the mind and prods the soul. — WILLIAM MICHAEL SMITH