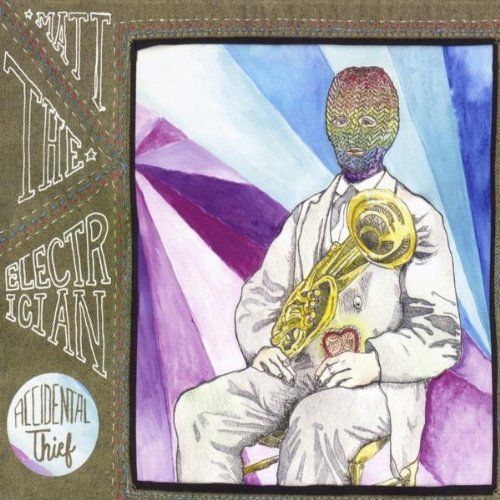 For dedicated fans of songwriter’s songwriter Paul Simon, Christmas came early this year with the release of the man’s best record since Graceland, the absolutely splendid So Beautiful, So What. But guess what? This little gem by Austin’s Matt Sever, aka Matt the Electrician, comes awfully close to topping it. Maybe the Simon comparison may seem a bit disingenuous, given that Sever’s singular charm is not sounding quite like anyone else; but there’s an undeniable element of almost casual eclecticism shared between the two artists — a disarming gift for marrying indelibly hummable, winsome melodies to adventurous musical arrangements that are anything but humdrum, and all without ever losing sight of the poetry of the song. Accidental Thief is Sever’s seventh studio album since his 1998 debut as Matt the Electrician, and anyone who’s already hip to his quirky trip will warm to the familiar baroque mix of banjos, Glockenspiels, trumpets, toy pianos, Wurlitzers, whistles and Severs’ toasty singing voice straight away. But after three or four listens, the record reveals a sense of ambition several steps up from anything he’s done in the past, employing a full but tasteful production that swells at points (“Pioneer Bride”) to Mumford & Sons-level grandeur while still retaining the intimate mystique of his acoustic solo performances. Meanwhile, all 12 songs here — several of which were born out of Severs’ participation in the ongoing House of Songs project, which pairs Austin artists with songwriters from other cities around the world — rank both lyrically and melodically amongst the best he’s ever written. The elegantly lovely “I Will Do the Breathing” and the spooky, playful “Ghost Story” stand out as especially fine, but isolating “highlights” on a record this steeped in beauty and whimsical wonder is, of course, purely arbitrary. — RICHARD SKANSE