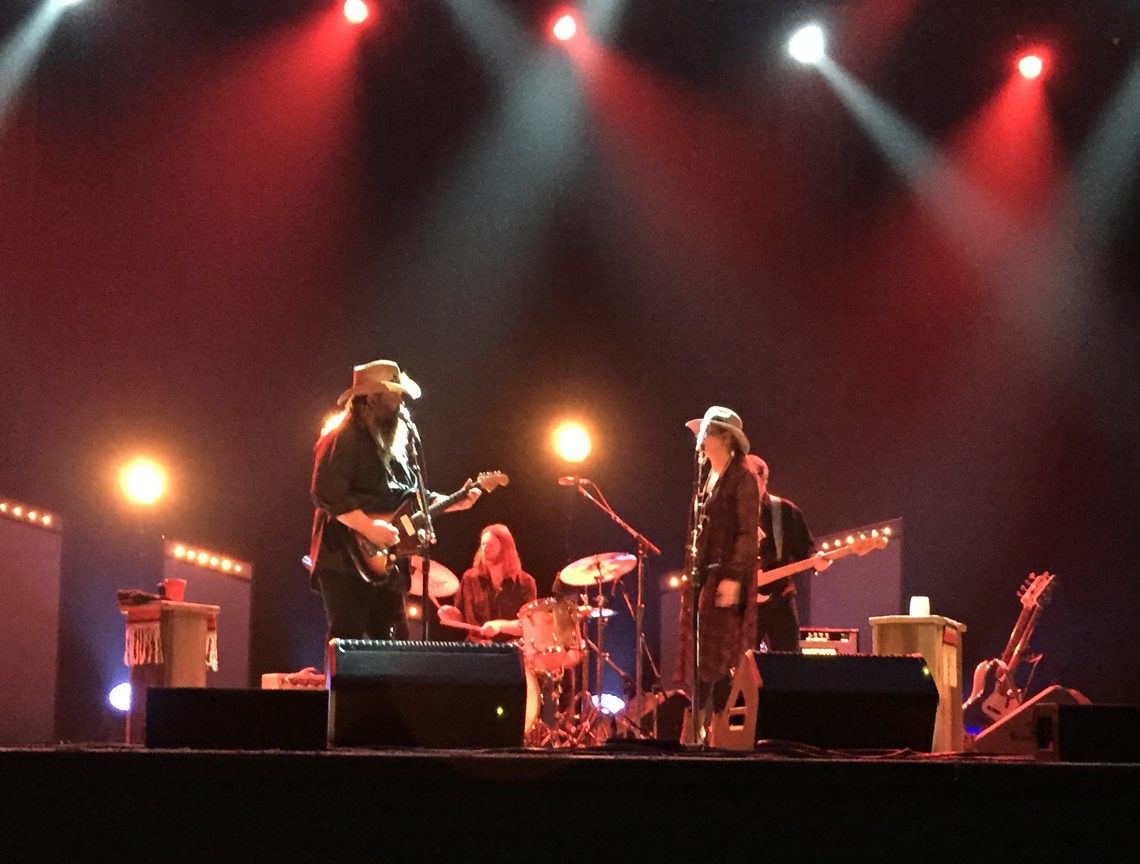 Nobody who was there is ever gonna forget the night Chris Stapleton came to Lubbock. For the “Traveller” himself, it may have been just another regular tour stop in a momentous year that’s already seen him collect armfuls of awards and accolades; but for those there to see him, the whole affair felt like something far more special than just a regular Friday night concert. It was almost like the modern-day equivalent of catching Hank Williams walking into a packed high school gymnasium or the Cotton Club back in the late-40s — one of those rare “I was there!” events to be permanently etched into memory.

The air of anticipation was palpable throughout the sold-out City Bank Auditorium from the moment Texas Southern rock torch-bearers Whiskey Myers finished their acoustic opening set, but it would still be nearly an hour before the main event. The pent-up restlessness quickly dissolved once the lights finally dimmed again, though, and the crowd erupted with joy when rhythm section Derek Mixon and J.T. Cure walked out and began pounding out the rootsy groove of “Nobody to Blame.” Then the Stapletons — Chris and his harmony singing wife, Morgane — made their way out waving and smiling, and any anxiety felt during the long wait was long forgotten.

“I’m gonna get you riled up before too long,” Stapleton told the crowd at one point, but he had them all from the word go. The first three songs — “Nobody to Blame,” “Traveller,” and “Fire Away” — were revelatory, with his soaring vocals proving as close to perfection in person as on his Grammy-winning debut album, Traveller. It probably shouldn’t be surprising how powerful that voice really is, but still you can’t help but to be blown away by the sheer force and kick in his whiskey-soaked roar. It can fill every inch of a large room during the likes of “Nobody to Blame” and “Tennessee Whiskey,” yet also has a gentle richness on dark, crushing ballads such as “Whiskey and You” and “Daddy Doesn’t Pray Anymore.”

After a handful of songs, an “I love you, Chris!” cut through the roar of applause from the corner of the theater. It might as well have come from the whole audience. “I love you too, man,” Stapleton answered back with a hearty chuckle while tuning his electric guitar.

After a commanding cover of Rodney Crowell’s “I Ain’t Living Long Like This,” Stapleton and his wife introduced a new song, presumably to be included on Morgane’s own debut album, called “What I Know Might Not Hurt Me.” Chris mentioned that it would be their first time performing the sultry number in front of a crowd, and jokingly asked if that would be alright with everyone. The song found the couple essentially switching places on lead and backing vocal duties, and the crowd seemed just as enamored with Morgane as they were with Chris.

As much as Chris and Morgane bring to mind Waylon Jennings and Jessi Coulter on their outlaw country crooners, they actually bend in other directions just as often. At times, they channel Ike and Tina Turner’s sultry, churning R&B groove, and they also dive into the realm of Southern soul and deliver bluesy swamp rockers with absolute conviction. The best moment of the night came when the couple sang their rendition of “You Are My Sunshine,” the song they recorded for the upcoming [producer] Dave Cobb project, Southern Family. In their hands, the traditional American standard becomes a soulful Southern Gothic slow-burner that highlights the magnet and steel attraction between them — especially in the way they sing the glowing piece not to the crowd, but turned toward each other. The performance showcased the perfect balance between the two singers; Morgane’s voice crystal clear and bright and Chris’ is chock full of grit and gravel.

Two songs later — that is, counting the snippet (opening verse and chorus) of “Freebird” served up before “The Devil Named Music” — and it was time to bring things to a close. When the band started playing “Tennessee Whiskey,” Chris asked for a “Texas-sized glass” of the same to the obvious delight of the audience. Instead of going right into the blues-infused country ballad, though, he took a moment to introduce the band — singing a unique verse each for Mixon, Cure, and Morgane. “Oh, and I’m Chris,” he offered humbly at the end, right before he finally started singing the Dean Dillon and Linda Hargrove-penned tune.

After that came a heartfelt round of thank you’s and goodnight — at least until the encore. Stapleton came back solo, armed with an acoustic guitar, and began picking the somber “Whiskey and You.” The audience, on its feet and hooting and hollering just moments before, fell intimate listening-room quiet through the whole number, except for when they echoed him on the chorus. Morgane and the band joined him right after for two more songs: the sweet, endearing “More of You,” and an extended jam through the gritty, aptly titled “Outlaw State of Mind.” And then they all left the stage again, this time for good.

Rest assured, though, that should Chris Stapleton ever find his way back to Lubbock somewhere down the line, a hero’s welcome is a given.