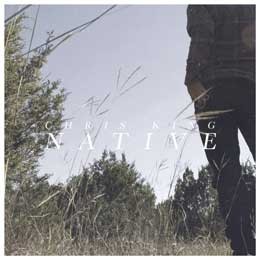 The January 2013 release of 1983, his first full-length, was just enough of a breakthrough to get Austin songwriter Chris King a nice string of road gigs, a decent chunk of regional radio action, and a burgeoning band called the Liberators. It’s a grand record and deserved even more, but progress is progress. Thus encouraged, King headed back into the studio on the barter system, armed only with a Gibson Hummingbird and a sense that it’d be best to strike while the iron was hot. The resulting album, Native, feels more like a companion piece to 1983 than a full-fledged follow-up — perhaps “Something Less Formal” should have been the title track; it’s as down-to-earth and intimate as the approach would suggest. King’s not one to overwork himself on the guitar, letting simple but purposeful strums and fills carry the day, but he’s an expressive vocalist with a gritty, rangy tenor perfectly suited to the detail-oriented come-ons (“Wheelhouse”), laments (“Cadillac”), and honky-tonk narratives (“Antler Inn Ballroom”) on bare-bones display here. Most of these songs showed up in fuller form on 1983 or his previous EP releases, so perhaps Native (which King is only releasing digitally) is only essential to his fans … but really, there’s less and less reason not to become one. — MIKE ETHAN MESSICK

Previous post Grant Ewing: "The Buzz of a City Night"