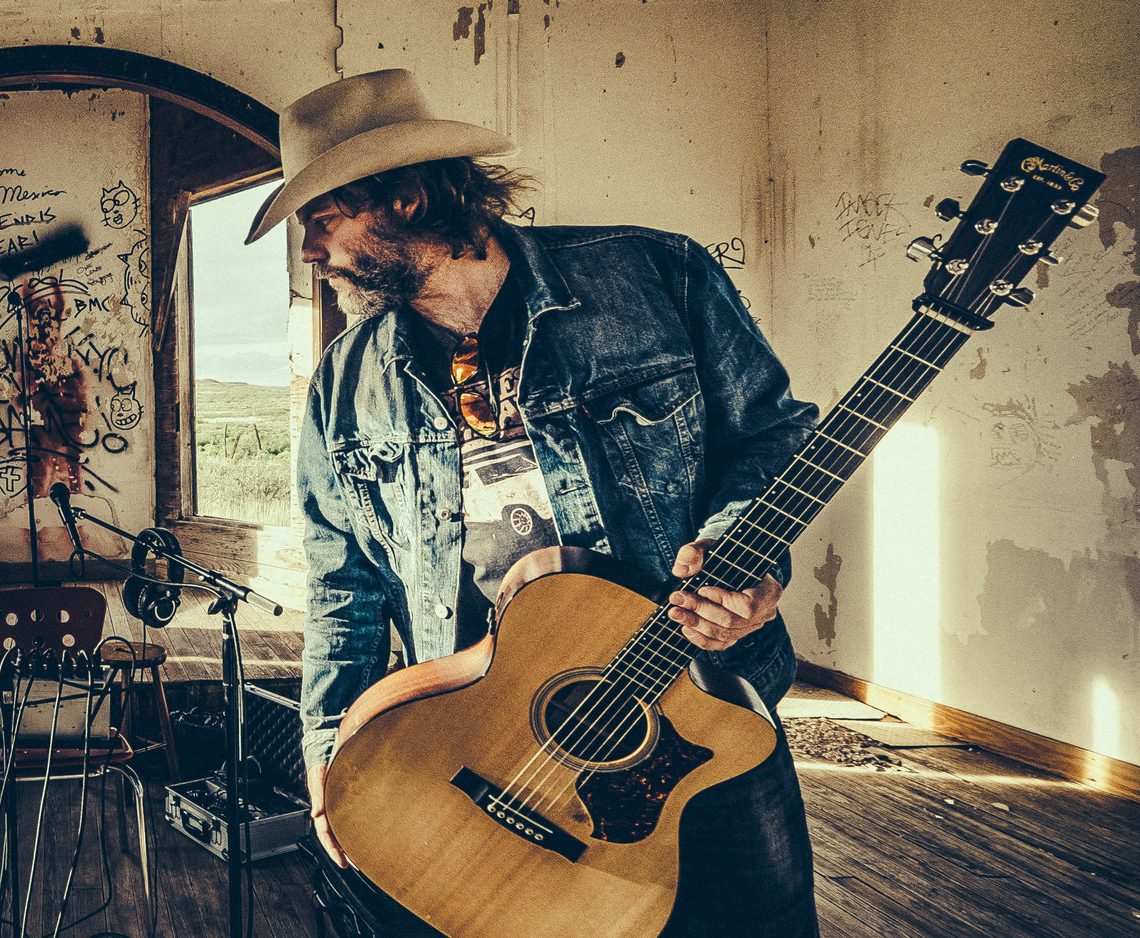 Last summer, Lubbock singer-songwriter Charlie Stout headed out into the New Mexico desert, hunkered down in the abandoned Presbyterian church of an old ghost town, and set to work recording with nothing more than an acoustic guitar, an 8-track recorder and a handful of microphones. He came away with 17 songs, nine of which would comprise his official debut album: Dust and Wind: Flatland Murder Ballads & High Plains Hymns. Originally released in digital format last September, the album was finally issued on CD this July — a full year after its completion.

In the months since it first surfaced online, the album’s bare-bones approach has struck a nerve with fans of storytelling and songwriting, reminding them that at the end of the day, it’s all for the sake of the song. But the sepia-toned ambience of Dust and Wind — the passing of vehicles barreling down the lonesome stretch of highway, the orchestra of chirping crickets, the passing of boxcars and howling trains, and the solitary wind — adds much to its appeal, as well.

Still, it’d all be for nothing if the bones of the songs weren’t already deeply rooted in a bleak, pressing world. Throughout the album, Stout continually reminds us that no matter who you are and what you’ve done, everyone’s eerily similar in their final fleeting moments of life. On songs like “I See Stars” and “The Hanging,” he keeps you focused on how even flawed men who have committed heinous acts look for redemption at the end of the day. They’re grounded in reality. It’s a world where actions have consequences — a notion he emphasizes time and again.

The first eight tales display a dark, depressive Western frontier that conjure crystalline images of cowboys gone awry and wavering Christians. Like Ryan Bingham’s Depression-era Junky Star, Bruce Springsteen’s dark-folk Nebraska, and the desert landscapes of Marty Robbin’s Gunfighter Ballads & Trail Songs, Stout’s Dust and Wind’s honesty and weight comes to you at its’ finest when you’re alone with just your thoughts. In its’ final 15 minutes, when even Stout’s stepped out of the room, and it’s just the dust and wind, when you’re thinking of your own mortality,  mistakes, and regrets — that’s when Dust and Wind ultimately sinks in.

Your songwriting has always romanticized the great West and frontier. What drew you to really exploring the human condition through that lens?

West Texas mostly. When I was a kid, I’d go out to my grandpa’s farm. When we were kids, a trip out there was fun. It was play time. It was getting rides on the tractor, things of that nature. When I was 15, I worked out there, throwing hay bales and driving the tractor mainly, but I didn’t really get a taste of work — how it truly was managing a farm or ranch. It was romanticized to me as being something my granddad did. I never really saw and understood how heart-wrenching that work really is. I think that’s partly the reason why. I understand that now and wish he knew that I understood it. I wish there was a way — maybe by writing enough songs, he’ll see what I’m doing.

A lot of a these characters on Dust and Wind, they’re flawed. They’re bad men who are running from the law or on trial. But the truly humanizing aspect to all these characters is that they’re all looking for some form of redemption — they’re looking to be saved.

Yeah. I did the record in an abandoned church and the songs that made the record, they seemed like they were in their right place being performed in that church. They were the ones I felt best about playing. I recorded 17 songs there that night and those were the ones that stuck out the most. I felt like those songs fit that room. I can’t think of a place more symbolic for seeking redemption than a hollowed out, 108-year-old church out in the desert.

Do you think that’s ultimately why the characters of Dust and Wind relatable? Everyone is looking for something to save them?

Everyone says “No Regrets.” They don’t even mind misspelling it. But I think you reach a point in life where you have a few. Those characters have reached that point. My songs, they’re not for the party crowd. I try to open for as many bands as I can and appeal to their fans as much as possible, but there’s a limit to what they’re willing to hear. They’re there to drink and have a good time. Which, I’m not opposed to at all. I just have more to tell you when you sober up. I make a joke sometimes about how the next song is a real party starter. Course, it’s not. It’s usually “The Hanging.” I don’t think any of these songs are on bars’ house music playlists. They’re not meant to be though. It’s a record you should probably listen to alone. It’s something I hope people listen all the way though too. The characters don’t just have flaws or regrets that they want fixed or at least recognize. The whole record is structured that way. The last song (“Sinner’s Prayer”) is sort of a confessional. Then, it’s 15 minutes of silence just to think about what you’re trying to get off your chest.

You know, another part about that record was that it was the first real creative thing I tried to do since Kent Finlay died. I hadn’t written any songs since then. When Tom Skinner died, Bryon White (formerly of Damn Quails) went to a weird place. When Kent Finlay died, I sort of did, too. It certainly gave me pause when I sat down to write. I sat on Dust & Wind for a long time. I recorded it in July (2015) and didn’t put it out (digitally) until September. I didn’t think it was good enough.

The stories told on this album, when you meet up with these confessing characters, it’s near the end. You don’t meet them while they’re stealing, cheating, and killing. You meet them in their final moments …

I see where you’re going with that. I agree. People say that everything happens for a reason. Yeah, it does. But, it’s not because this is all fixed and always meant to happen a specific way. It’s because actions have consequences. There’s cause and effect. The cause is normally because you’re an idiot. There has to be believability to your songs. One of the things I heard from Owen Temple was that songs have to be credible. Kent Finlay said you had to have some truth to a song. It didn’t have to be the truth, but has to have some truth. The truth is, there are consequences to what you do. When you’re alone at night with just the crickets and the passing trains, that’s when they come to haunt you.

Yeah. It’s almost as though you don’t see the cause. You just see the effect of these actions. Kurt Vonnegut said you should always start as close to the end as possible. There’s a lot of that on here.

Most of my songs, they’re written from the end forward. Most of the ideas I have that are unwritten, it’s because I haven’t written the story to support the conclusion.

As mentioned, this record was recorded out in the abandoned Presbyterian church. It added a layer of grit to the recordings. Like you said a few minutes ago, those songs found their right place to be recorded. There’s a sense of realism with the outside sounds bleeding in. But at the same time, it adds a fantastical ambience. It’s borderline mythical.

I always try to think of my songs as being cinematic. It’s something that I aspire to put into songs. As a photographer, specifically as a landscape photographer, I can’t help but think in those terms. If you look at Western films, all the real good ones, they put you in the West. They open with an establishing shot of the countryside. The setting becomes a character. It’s an advisory. It’s seldom your friend. You know, I could romanticize the recording process or I could just say it’s that way because I was broke. Scott Faris of Amusement Park Studios and I combed through 70 songs and shortened it to about 15. We had arrangements made. Musicians picked. All I needed was money. I’m glad we got as far as we did. Most people have money before having ideas. That’s how bad records are made. Maybe it saved me from making a horrible record. So we had a lot of plans and dreams, but not a lot of the money — and the money is part of it. I don’t believe in cutting corners so I did the best that I could with what I had. There was a lot of frustration at the time.

Yeah. Now, some people are going to do just that — romanticize the idea. Drive off into the desert with a handful of mics and try to replicate that.

I think people been trying to do that since Springsteen’s Nebraska. Matter of fact, there’s an Onion article about it. The headline was something like “Man Grabs Guitar and Four-Track Record, Goes Out to Make Shittiest Record Ever Made.” I had that going through my head the entire time out there, too! [Laughs]. What if this doesn’t hold water? But like you said, the desert did become a character in a way. I didn’t have a studio, but there the desert was. I had the trains going by. I had the cars and the trucks on the highway. I had the creatures of the night come alive as the night wears on. You can hear the sound of the crickets change because the temperature changing as the desert cools. That’s my band.

It’s the time. I’m not going to force a record out. One of these projects is about outer space and West Texas. We have an observatory out in Ft. Davis. We have a launch pad out north of Van Horn. There’s exciting things happening out in this new frontier of the West. I’m fascinated by it all. But I’m not going to rush it by recording crappy songs just because I have a deadline and love the overall concept. They need to write themselves. This is going to get real artsy-fartsy, but songs want to be something. You’re given custody of them and guide them into being the thing they want to be. Some people are just bad parents. One of the greatest compliments I’ve ever received was from fellow Lubbock songwriter Stephen St. Clair. He came up to me one night after I’d opened for him. He said that my songs were “completed.” I don’t know if I’ve ever had a better thing said to me. It takes work to finish. You can’t take anything away from it. You can’t add anymore to it.