LSM Playlist: Singing the Nashville Blues 12 anthems from the "minor leagues" about fighting — or joining — the country music mainstream 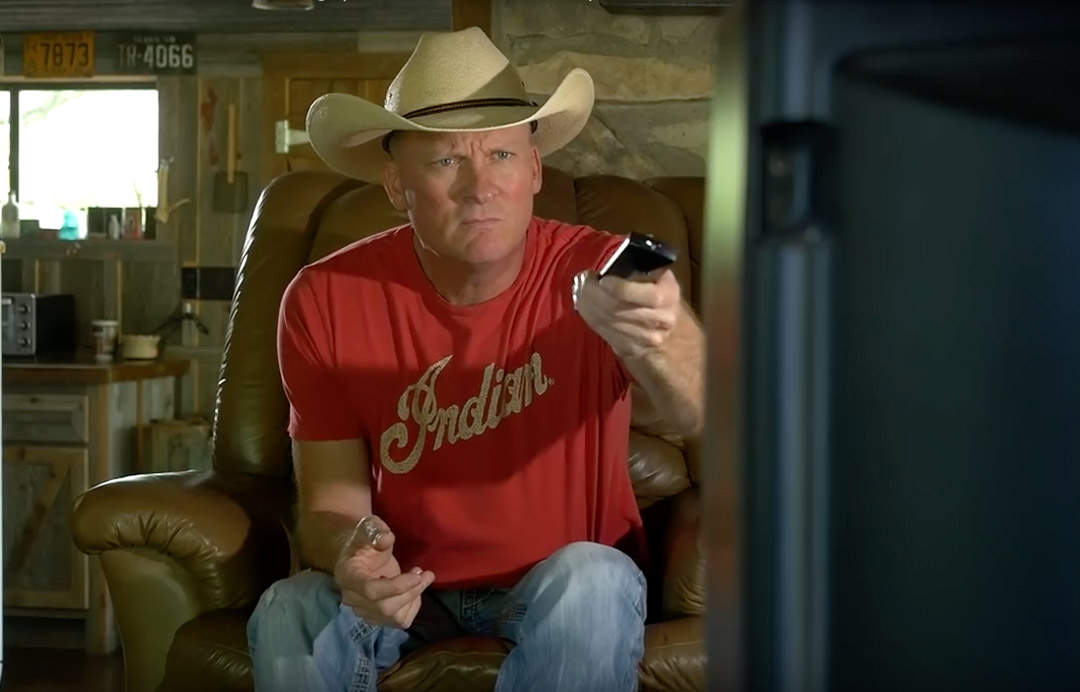 Kevin Fowler from the video for his "Sellout Song."

The strained relationship between mainstream country music’s Nashville epicenter and the relatively left-field artistic frontier of Texas goes at least all the way back to the days when Bob Wills & the Texas Playboys couldn’t get a Grand Ole Opry gig on account of the drum kit and horn section that flew in the face of the era’s southeastern country music orthodoxy. Country music has gotten considerably less puritanical over the years, but the Music City status quo has still given independent-minded artists in Texas and elsewhere plenty of reasons to rebel over the decades. The most iconic and successful wave of iconoclasts came with the 1970s outlaw movement (Willie Nelson, Waylon Jennings, Kris Kristofferson, Jerry Jeff Walker, Joe Ely et al), fueled by rock ’n’ roll rowdiness in opposition to a so-called “Nashville Sound” that was veering a little too close to easy listening. A decade or so later, punk-informed outfits like Jason & the Scorchers, Uncle Tupelo, and Whiskeytown might have been more marginal, but still found a place in the dawn of the niche-friendly “Information Age” where just about any viable movement (musical or otherwise) could find a few hundred followers to validate their idea of what country — or at least country-ish — music could or should be. More than ever before, the mainstream music business didn’t necessarily have the last word.

Which brings us to the more recent and (at least for purposes of this publication) relevant past. The genre of so-called “Texas country” or “Texas/Red Dirt” or whatever your preferred nomenclature is took shape around the mid-90s, and for the brasher kids and crankier veterans in the bunch it was an opportunity to take on the Nashville establishment not only in sound but occasionally in song. The divide between the mainstream and the alternative has grown a bit less sharp in recent years; most of the more-successful Texas or alt-country acts have made at least modest inroads into Music Row, to the point where there’s no longer a danger of being accused of treasonous levels of cynicism and opportunism just for trying to broaden one’s horizons. But occasionally things come to a head again, with online press and social media recently blowing up over something as seemingly innocuous as recent Texas-to-Tennessee success story Granger Smith offhandedly referring to the Texas country circuit as “the minor leagues” in an interview and Lone Star stalwart Wade Bowen gently calling him out on it.

As one would expect, the artists themselves have been diplomatic enough about the whole thing, with most of the vitriol reserved for the Facebooks and comments sections of the world. But in the wake of all the fuss, we figured we’d take a look back at some of the musical shots across the bow — some harsh, some gentle — taken by the independents against the establishment in the post-outlaw country music world.

Dale Watson, “Nashville Rash” (1995)
A proud graduate of whatever school burned down before they even got around to building the “Old School” of country music, baritone twang devotee Dale Watson was already throwing down the gauntlet two decades ago over a Johnny Cash beat spiked with Bakersfield-friendly guitar licks. “You can’t grow if you rip the roots out of the ground,” he snarled, name-checking a few of the expected heroes alongside more obscure exemplars like Faron Young and Johnny Bush. A couple decades later, Nashville’s pop quotient has increased exponentially, while Watson’s retro-fueled devotion remains unchanged (he’d eventually get even ornerier with “Country My Ass”).

Robbie Fulks, “Fuck This Town” (1997)
Irreverent to his core, Chicago-based alt-country lifer Robbie Fulks only waited until his second album to eviscerate a town (and by extension an industry) that seemed indifferent to tradition and hostile to artistic adventurousness, the two things he held dearest. “I shook a lotta hands/and wrote a lot of dumbass songs,” he laments over a jittery swing beat, almost as disgusted with himself as he is with a system that he thought “hit rock bottom in the Ronnie Milsap days” and apparently kept going downhill from there.

Cory Morrow, “Nashville Blues” (1998)
For a song that became a rallying cry of the whole Texas/Red Dirt movement, Cory Morrow’s early regional favorite is actually a pretty poignant number. The aging, marginalized songwriter of the then relatively fresh and unproven Morrow’s narrative isn’t furious, he’s just weary and wondering where he fits in when even legends like Johnny Cash and Merle Haggard can’t get much traction anymore. Much like the more-recent Granger/Wade dustup, what’s on the record was much less angry than the circus that came to surround it: Morrow’s increasingly big crowds grew fond of chanting “Nashville sucks!” in lieu of just requesting the song, and of course the phrase made its way onto some t-shirts up at the merch booth. Both the shirts and the chants were pretty easy to come by in subsequent years even at shows where Morrow wasn’t on the bill.

Robert Earl Keen, “My Home Ain’t in the Hall of Fame” (2001)
Off of his sort-of-forgotten Gravitational Forces, Keen’s cover of contemporary bluegrass artist J.D. Crowe’s mission statement hits a spot somewhere between sour grapes and c’est-la-vie serenity. “My songs don’t belong on Top 40 radio” sounded pretty self-aware coming from a man revered for his off-kilter voice and darkly humorous story songs. “I’ll keep the old back forty for my own,” he sang, comfortable with acknowledging his distance from commercial country music without railing against it.

Jack Ingram, “Happy Happy Country Country” (2003)
A classic case of having one’s cake and eating it too, this number off Jack Ingram’s Live At Billy Bob’s album is a bouncy, upbeat number about how country artists at the time (and probably even more so today) are discouraged from tackling the heartache and hurt that most of the genre’s classics were built upon. Kicking off with a sarcastic shout-out to the country radio industry and ending on a snarky quote of Brooks & Dunn’s “Beer:30,” it’s at least as catchy as the songs it ironically decries.

Todd Snider, “Nashville”(2004)
He might have hung around Texas enough to fall in love with Jerry Jeff and Cheatham Street Warehouse, but now-veteran gonzo troubadour Todd Snider is pretty proud of his longstanding proximity to the home of the Opry. East Nashville Skyline was the title of the sublime record containing this piano-pounding shout-out to the musical meccas of Memphis and Texas that still comes around to “there ain’t nothin’ wrong with Nashville/ain’t nothin’ wrong that we can’t fix in the mix.” A little tongue-in-cheek, sure, but it’s nice to see a left-of-center voice sticking up for the town.

Terri Hendrix , “Monopoly” (2004)
The earthy, eclectic Texas folkie Terri Hendrix doesn’t usually do “angry,” but she was able to summon up enough venom to tackle the state of the mainstream with a searing, thumping, banjo-laced attack from a unique angle: maybe the real problem was media conglomerates. “The local DJ lost his show, after 20 years on the radio/Now we’re stuck with what the monopoly provides,” she laments, and isn’t shy about calling out Clear Channel by name (folks who’ve just heard the tune in passing would probably assume it’s just called “The Clear Channel Song” or something similar). The takeaway: Not only do we get stuck with bad radio when monopolies run rampant; it’s the same kind of bad no matter where you go.

Pat Green, “Country Star”(2009)
A confusing track even for his most devoted fans, it’s hard to say for sure if Green’s tossed-off lines about yearning to ride the bus with Brooks & Dunn or hit the road with Keith Urban were a sincere stab at keeping a toehold in Music City or a sarcastic poke at the lengths he was going to to keep his career rolling along. It wasn’t as memorable as his Texas-centric early work or his bigger-production mainstream hits, but it remains a souvenir of a conflicted time in a fascinating career.

Jason Eady , “AM Country Heaven”(2013)
More of a folk singer-songwriter before he realized how good a fit his distinct vocal purr was for classic country, Jason Eady steered his career towards a steel-and-sawdust vibe on 2011’s AM Country Heaven, headlined by a title track that amusingly detailed the aesthetic of country music’s more rustic, adult-friendly days (“when the women were ugly/and the men were all 40 years old …”). The last verse takes a swipe at a Nashville record label suit pushing that same old mantra about sad songs and waltzes not selling this year; Eady’s album sold just fine, and made him one of the most acclaimed singers in his chosen field.

Wade Bowen, “Songs About Trucks” (2013)
A song on loan from the somewhat left-field Nashville songwriting standout Brandy Clark, Bowen’s single gently reminded the country music industry that incessant numbers about tailgate parties and dirt roads might not be the best fit for every frame of mind.

Randy Rogers & Wade Bowen, “Standards” (2015)
Longtime buddies and song-swap tourmates Rogers and Bowen committed their brotherhood to record on Hold My Beer Vol. 1, a studio effort that stepped at least a little outside their comfort zone with producer Lloyd Maines at the helm and tradition-minded country as the order of the day, on covers and originals alike. Perhaps the most memorable of the bunch hinged on the hook “I don’t have hits/I’ve got standards,” the double meaning pledging loyalty not only to one’s own ethos but also the classic-country mainstays. Cast as a conversation with another scheming record-company rep, it packs a little extra punch knowing both singers had taken at least brief rides on the Nashville-label carousel before getting back to their roots.

Kevin Fowler (feat. Zane Williams), “Sellout Song” (2016)
Unlike some of his more earnest contemporaries, Kevin Fowler was in some ways bro-country before bro-country was cool (or at least omnipresent). He didn’t have to change too much during his own dalliance with the Nashville record labels; his good-humored, bumper-sticker-friendly hooks were already his stock in trade during his indie beginnings. But even the reliably unpretentious Fowler couldn’t help but take a few shots at the hip-hop-inflected silliness of modern Top 40 earlier this year with a song and video co-starring the usually more-troubadourish Zane Williams. Texas country headliners Randy Rogers and Casey Donahew were in on the joke too, destroying a TV screen playing the video during the video itself. It toed a weird line between justified parody and self-recrimination, proud country boys singing a country-rap hybrid about how cynical and lousy country-rap hybrids can come off.