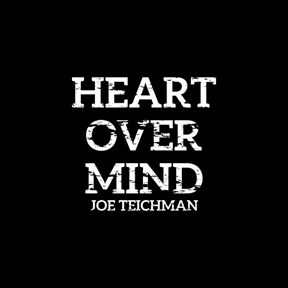 Texas-born singer-songwriter Joe Teichman takes this traveling troubadour thing seriously: he’s recently departed his Central Texas comfort zone for a new home base in Colorado, but he’s been finding ways to take his usually-solo-acoustic show on the road more or less nationwide for a couple of years now. The miles have clearly found their way into his songs; his debut EP (2014’s Backburner) was a more-than-worthwhile foot in the door, but this full-length debut lands somewhere between “solid” and “astonishing” track after vibrant, well-considered track.

Given the opportunity to flesh out his road-tested balladry with some full-band arrangements, Teichman still keeps it refreshingly simple: woody acoustics, brisk drums on the upbeat numbers, wiry electric guitar atmospherics and occasional organ finding their place no matter the tempo. It’s all to the benefit of the songs, with Teichman’s voice front-and-center as it should be: he’s not one to hold and bend a note with soul-singer grace, but he does have a relatable and distinctive baritone that lends plenty of gravity to his tales of love, despair, exploration, and gratitude. He certainly clocks a lot of words-per-minute (even by Texas songwriter standards), especially on the faster songs, which could be exhausting in lesser hands. But with Teichman, you get the feel that his creative impulses just couldn’t restrain themselves; the shotgun blasts of lines hit places straightforward, poetic, poignant, and sometimes even charmingly awkward in a John Hiatt-esque “nobody else would have come up with that” sort of way. Highlights include the rockabilly-tinged “Easy Decision,” the radio-friendly “What If I’m Wrong,” the freight-train chug of the title track and the mournful waltz of “Hardheaded, Heartbroke and Lowdown,” but if Teichman’s young-ish contemporaries can still bring themselves to consume an album whole, this one’s a great place to start. “The room was loud and the ceilings high / The pictures hung with purpose like / A declaration of art and love that’s whipped right through the walls,” Teichman sings, setting a scene on the compelling “Silver City.” Sums up this record pretty well. — MIKE ETHAN MESSICK