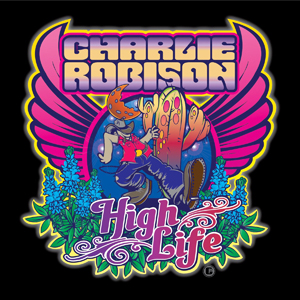 It seems every Texas singer-songwriter worth their salt will at one point in the careers do an entire album covering songs written by some of their favorite tunesmiths. We had Lyle Lovett’s Step Inside This House, Ray Wylie Hubbard’s Delirium Tremolos, and Slaid Cleaves’ Unsung. Shoot, even expatriate Okies like Cody Canada and the Departed did it with their This is Indian Land hosanna to Red Dirt royalty. And now, with High Life, Charlie Robison weighs in with his own installment in the songs-that-ain’t-his-own cannon. Robison doesn’t have to search too far for top-shelf sources, of course; one-third of the album’s nine songs come from those he’s shared a few Thanksgivings with. In addition to borrowing brother Bruce’s “Brand New Me,” he tries on little sister Robyn Ludwick’s sumptuous “Monte Carlo” and “Out of These Blues.” He also reaches back to his early influences from the late ’60s and early ’70s, with Dylan’s “When I Paint My Masterpiece” and The Band’s “Look Out Cleveland,” which sparkles in the hands of this Lone Star roadhouse rocker who really means it when he sings classic lines like, “Look out Houston, there’ll be thunder on the hill, bye-bye baby, doncha lie so still.” Not surprisingly, his spirited Doug Sahm cover (“Nuevo Laredo”), Kinky Friedman’s “Wild Man from Borneo” and Ry Cooder’s border-flavored “The Girls from Texas” are all right in Robison’s ballpark, too. In fact, High Life plays so much like a “regular” Charlie Robison album — and a really good one, to boot — that fans not in on the covers aspect of it will likely be surprised to learn that these gems didn’t spring from the Bandera cowboy’s own creative juices. — D.C. BLOOM