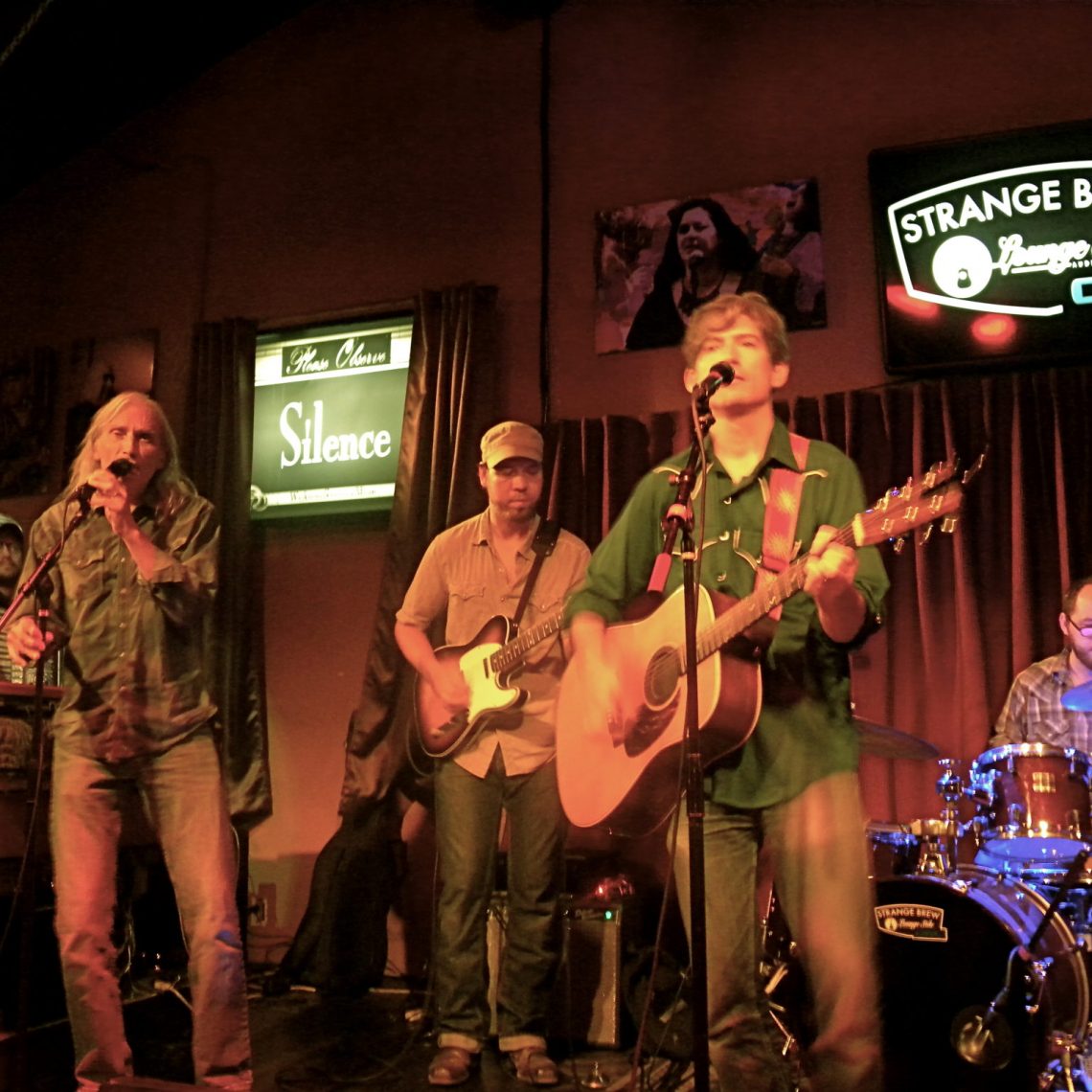 Colin Gilmore (with his dad, Jimmie Dale Gilmore, at left) playing his album-release show at Strange Brew Lounge Side in August. (Photo by Tiffany Walker)

It’s a Friday night in Austin, and a host of in-the-know local music enthusiasts have gathered at, of all places in this “live music capital of the world,” a little coffee shop tucked between a karate school and a smoke shop in the middle of an unassuming strip mall just off of South Lamar. No, they’re not lost. They’re here for a healthy serving of what one fan calls “metaphysical Texicana,” courtesy of a release soiree for singer-songwriter Colin Gilmore’s terrific new album, The Wild and Hollow. It’s an occasion worthy of celebration amongst friends and peers, and an evening of fine music worthy of nothing less than the room voted not only “Best Acoustic Venue” but “Best New Club” at the 2012-2013 Austin Music Awards: Strange Brew. 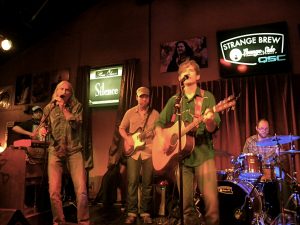 Colin Gilmore (with his dad, Jimmie Dale Gilmore, at left) playing his album-release show at Strange Brew Lounge Side in August. (Photo by Tiffany Walker)

The energy in the dimly lit room is palpable, the sound warm and pristine, and there are lots of familiar faces in the crowd. Over the course of the evening, a few of them join Gilmore and his band on stage: Bonnie Whitmore, Sally Allen, and even Colin’s father, Jimmie Dale Gilmore of Lubbock’s legendary Flatlanders. When Colin’s wife, Tammy Lynn, joins in singing Townes Van Zandt’s “Loretta,” a woman in the audience smiles and whispers approvingly, “Lubbock always does a Townes song.”

Of course, songwriter’s songwriters like Townes have long been revered in Austin, too, and since the Strange Brew coffee shop opened up its Lounge Side listening room, it wasn’t long before it became the venue of choice for many of town’s best songwriters and fans in it “for the sake of the song.” Gilmore said that he picked Strange Brew for his album-release show because “it has all the right things going for it at once: the sound, the atmosphere, the dedication to the music, the overall vibe. The community that has formed around it is a true blessing.”

Outside, you’ll find a parking lot with ample free spots (and not the ones you have to back into at an angle, which have become annoyingly trendy in other parts of town). Inside the 24-hour establishment, you’ll find not only superb coffee, but an offering of pastries, sandwiches, and a tasteful beer and wine selection. The staff is friendly and gracious, the audiences quiet, and the concert calendar second to none in the genre of modern folk and Americana. Over the course of a typical week, Austin music junkies can get their fix of Scrappy Judd Newcomb, the Apostles of Manchaca (a group evolving from a Strange Brew collaboration between Jeff Plankenhorn, Malford Milligan, Michael O’Connor, and Rick Richards), Durawa (another homegrown group headed by Texas Tornadoes’ drummer Ernie Durawa), Matt the Electrician, Miles Zuniga, and a Sunday gospel brunch hosted by a revolving cast of characters including the aforementioned Apostles of Manchaca and Newcomb, Jon Dee Graham, Seela Misra, Jon Greene, and David Grissom. Ian Moore, Jimmy LaFave, and even the Glen Miller Orchestra have also graced the Strange Brew Lounge Side stage. In fact, you never know who might show up there: Patty Griffin did a “secret show” before hitting the road for a recent tour; Ruthie Foster stunned a Sunday gospel brunch crowd; James McMurtry and BettySoo swapped songs and hilarious barbs one evening (seriously, who knew McMurtry was so funny?); and both Billy Gibbons and Christopher Cross showed up for a Van Wilks show. Soon thereafter, Cross did his own Strange Brew show.

Strange Brew’s buzz developed organically, by word of mouth. But it’s no accident that everyone is raving about the place. Every detail of the room has been carefully considered by its founder and president, Scott Ward, and his team, which includes three hand-picked sound technicians as well as respected artists Kacy Crowley, who books the room, and Plankenhorn, who serves as its musical director. Each week, team Strange Brew meets to brainstorm about what’s working, what could be better, and what tweaks can be made to ensure that the Strange Brew Lounge Side continues to be a venue loved by artists and patrons alike.

“There’s a big music community here,” Ward acknowledges, “and it’s important to me to give back to that community.” To that end, gospel brunch proceeds go to the Austin Food Bank and there’s an ever-present tip jar benefiting the SIMs foundation. Strange Brew also allows artists to rehearse during the day and encourages artistic collaboration and experimentation through weekly residencies. Matt the Electrician refers to it as a “singer-songwriter’s haven — an amazingly comfortable place to play songs when you want an audience to listen.”

For those listening to Gilmore’s show, it was a special night. But, in many ways, it was just par for the course at Strange Brew Lounge Side. At the end of the evening, Ward got up onstage and offered to buy a drink for any patron in the packed house who purchased Gilmore’s new album. “That’s just the spirit of Strange Brew,” he beamed.