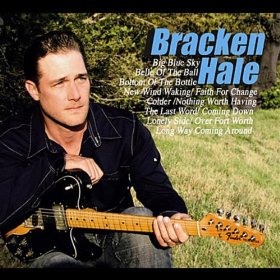 Austin, Texas, has never exactly been short on country acts of the retro persuasion — but it could stand a few more on the level of Oklahoma transplant Bracken Hale. Hale’s not new to the scene; he’s been gigging hard since the ’90s, albeit mostly as a bassist for the likes of Gary P. Nunn, Chris Wall and Chapparal. But on his self-titled debut, Hale jumps out of the crowd like a ’60s silver screen idol in a sea of extras. With 13 tracks clocking in at just over 50 minutes, the record feels a little like a tad too much of a good thing, but there’s absolutely no filler here. Every song (all of ’em originals) showcases Hale’s suave country croon and deft ease at turning a matter-of-fact phrase or sentiment into something both dignified and poetic. Glen Campbell in his prime could have mined a fistful of hits out of material this uniformly strong — especially golden nuggets like “Over Fort Worth” and “Lonely Side” — but he would have been hard pressed to beat the originals. Hale plays most of the tasteful but satisfyingly twangy electric guitar and all of the bass, but producer Eric Hisaw proves a kindred spirit every note of the way, coloring the tracks with inspired touches like Ron Flynt’s B3 organ, a hint of trumpet (Mike Vasquez) and heaps of pedal steel (by Danny Hawk and Burton Lee). The end result is an album that plays like a cool blast from the past, like a crystal-clear channel back to the heyday of Jimmy Webb and pre-Outlaw Waylon Jennings. But although it clearly harkens back to another era, it’s too good of a record, and Hale too strong of a writer and singer, to call “retro.” Just think of it as a misplaced classic. — RICHARD SKANSE