Book Review: “Without Getting Killed or Caught: The Life and Music of Guy Clark” By Tamara Saviano (Texas A&M University Press) 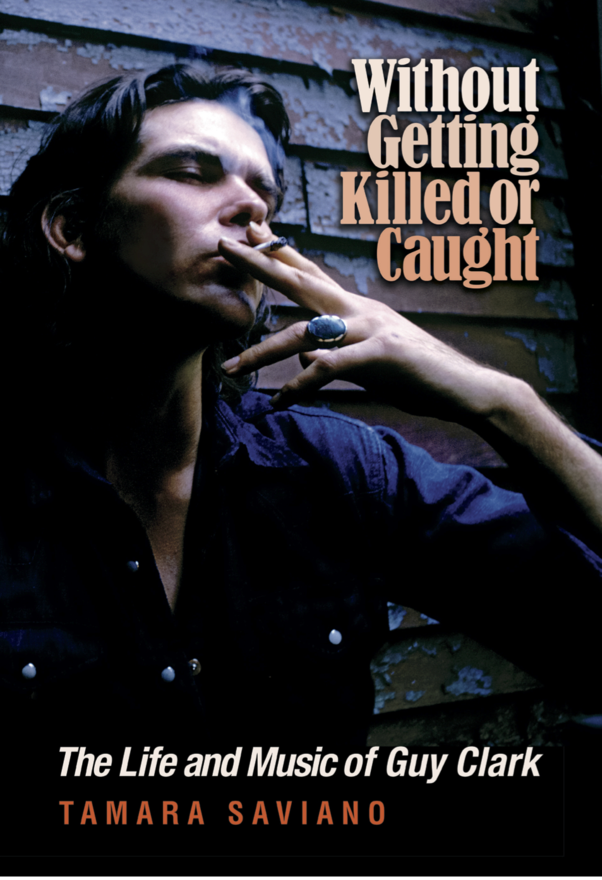 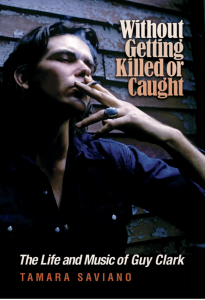 Without Getting Killed or Caught:
The Life and Music of Guy Clark
By Tamara Saviano
Texas A&M University Press

Tamara Saviano was 14 years old when she heard her first Guy Clark record. It happened to be his then-recent debut, 1975’s Old No. 1, and its impact on the young Wisconsin girl was profound.

“I wanted to know everything about the songs,” she recalls, “the vivid four-minute short stories about exotic people and locations.” Listening to that record on her dad’s turntable, she wanted to know, “Who was Rita Ballou, and what was a slow Uvalde Shuffle?”

Years later, she would have the opportunity to ask the man himself these very questions — along with a lifetime’s worth of others — through the writing of Without Getting Killed or Caught: The Life and Music of Guy Clark. It’s the first biography devoted to the legendary Texas songwriter, and though it’s not authorized, it was written with Clark’s full consent and is as close to definitive as anyone is ever likely to come. Saviano’s scores upon scores of original interviews with Clark, his family, and countless peers and followers lend the book a satisfying heft and depth that at its best recalls the well, epic scope of Joe Nick Patoski’s acclaimed Willie Nelson: An Epic Life.

Saviano was certainly well positioned to tell Guy Clark’s story from the start. Prior to beginning work on her Clark book (which along the way also led to both a 2011 tribute album that she co-produced, This One’s for Him, and a still-in progress documentary feature film), Saviano was already a Grammy-winning producer as well as an experienced music journalist, talent booker, concert promoter, publicist, and artist manager. All of that first-hand experience as a music industry insider informs her perspective on Clark’s story to some degree or other — as does the fact that through her work on the project, she became one of his closest friends, right up until the end of his life earlier this year.

“There are hundreds of ways one can approach writing a biography of this breadth and scope,” she writes at the outset. “I hope I have conveyed how important Guy is as an artist, as well as shed some light on how his lifestyle and relationships fed his artistry.”

It’s no surprise to read that there is truth in all of Guy’s songs. And there are songs in every truth. It was the 21st of June when the first streamline train came through town (“Texas, 1947”). There was a Skinny Dennis (“L.A. Freeway”), and Guy’s father really did have a “Randall Knife,” the blade of which Guy and his friend, Victor, really did break trying to stick it into a tree. “It still amazes me that people get it,” Clark says in the book. “It’s a connection with your father that every man has to resolve…The knife is a metaphor. It’s a combat knife, made to kill people. The irony is that it became a symbol of love between us because he wasn’t pissed off when I brought it home broken. That was a gift.”

Clark was brutally honest in sharing his story with Saviano, with intricate —and intimate — facets that had never before been made public. Saviano eloquently describes the sensitive, unique and sometimes painfully uncomfortable relationships between Guy, Townes Van Zandt, and Susanna Clark — Guy’s wife. It was a triangle not unlike the one featured in Larry McMurtry’s book, Leaving Cheyenne. In a New York Times review of that book, Marshall Sprague wrote that McMurtry’s characters “were unconventional, but they knew about life and love and seized both without hesitation or regrets.” Life imitates art, as Sprague’s words could have just as easily been written about Saviano’s account of Guy, Townes, and Susanna. Guy and Susanna were married and Guy and Townes were best friends, she writes, but “Susanna and Townes were soul mates.”

But however much the complicated relationship may have blurred the line between comedy and tragedy, in a recent interview Saviano noted that Clark told her he considered his early years with Susanna “to be the best days of his life — when they were young in love and living for their art.” Susanna inspired his art right up until the very end, too; he wrote the title track to his last album, 2014’s Grammy winning My Favorite Picture of You, about her. And although he never did write a song about Townes, it was not for lack of trying. “I’ve got about 20 pages of one-liners — emotional, tear-stained, wine-stained, coffee-stained one liners,” Clark told Saviano. “I’ve been writing about Townes since the day I met him … but I never found the right words to say.”

More than eight years of research and interviews with 200 people bring the private world of Guy Clark out of the shadows. Organizing a lifetime into a story is a challenge. Where is the starting place? How does one describe the influences of domino-playing old men and boat-building carpenters? The significance of Dylan Thomas and Bob Dylan?

Saviano divides Clark’s life into three sections: “The Beginning,” “Nashville,” and “Guy and Me.” Within the sections, each chapter could stand alone as an essay about that moment in Guy’s life, while the bigger picture tells the story of the multiethnic Texas roots of progressive country and the coming of age of Americana. And although she’s never less than upfront about her close, personal relationship with her subject, her portrait of the artist never feels airbrushed. She writes with an insider’s eye about Clark’s failed attempts to find a niche with commercial record labels, and does not shy away from his weaknesses and pitfalls, including the alcohol and drugs that were apparently as much a part of his sustenance as bread and water.

As Saviano recounts in her preface, when Guy first agreed to the project, she asked him, “Are you sure you’re up for this?

“I want you to spend hours and hours with me and let me interview you about your life,” she continued. “I want you to introduce me to your family and friends and cowriters and colleagues and anyone who is important to your story and tell them to speak honestly with me. Then I’m going to write the book. And you can’t read it until it’s published.”

Guy Clark died on May 17, 2016, five months before the book’s release. He never did get to read it. But if he had, one imagines his assessment would likely have been much the same as his response to Saviano after she laid out her own requests and ground rules: “Sounds fair to me, Tamara.”

Author Tamara Saviano begins a month-long fall book tour promoting Without Getting Killed or Caught: The Life and Music of Guy Clark, on Friday, Oct. 14 in Nashville. She will be joined at many of these stops by special musical guests who will perform selections from the Guy Clark songbook. This includes her Wednesday, Nov. 2 appearance (at 6 p.m.) at Superfly’s Lone Star Music Emporium in San Marcos, Texas, where her guests will be Central Texas songwriters Terri Hendrix, Brennen Leigh, and Noel McKay. Here’s the full tour schedule (check venues for times and additional details.)

Next post Austin's House of Songs gets PBS spotlight