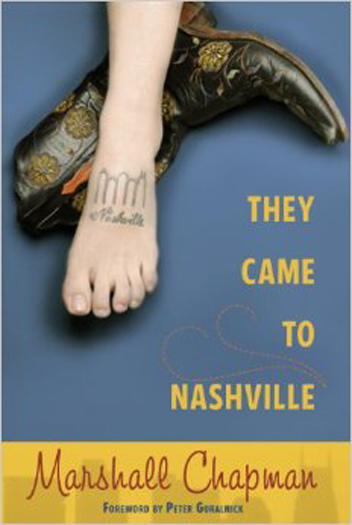 They Came to Nashville
By Marshall Chapman
Vanderbilt Univ. Press

Marshall Chapman’s half-memoir/half-interview book They Came To Nashville begins with this intriguing passage: “The night I met Billy Joe Shaver, my hair caught on fire. I kid you not.”

Chapman, who went on to a serious career as a major-label recording artist, performer, sidewoman, and songwriter, has been in Nashville almost 45 years since leaving Spartanburg, S.C., to enroll in Vanderbilt University. With a mother who was big in South Carolina politics and a father who was a prominent textile executive, Chapman came to town with a few social connections that found her partying with guys like legendary producer “Cowboy” Jack Clement shortly after arriving in Music City. During her years there, she seems to have met and ran with with nearly everyone who is anyone in the Nashville music scene, with one foot in the underground and one foot in the mainstream. She was also propitious in the timing of her arrival, reaching Nashville just as Mickey Newbury was standing the Nashville old guard on its ear, when Willie and Waylon and Bobby Bare were making serious waves, when Kris Kristofferson showed up after quitting the army.

Chapman’s insider credentials are impeccable, as proven by the wide range of artists she interviews throughout her book. Her subjects range from icons like Nelson, Bare, Kristofferson, Emmylou Harris, and Rodney Crowell to lesser-known Nashville stalwarts Bobby Braddock, Gary Nicholson, Beth Nielsen Chapman, and Mary Gauthier and even budding superstar Miranda Lambert. Chapman’s own familiarity with Nashville and the way it works makes these interviews, for the most part, frank and to the point, but with plenty of room for the telling anecdote. And there’s often more grit than glamour.

Chapman’s other strength is as a writer and raconteur. She reveals much about herself in the preludes to the actual verbatim transcripts, and these revelations make us love Chapman, flaws, blemishes and all. There is an element of humanism and charity in her writing; she is, above all, a giver of the benefit of the doubt, and all the more likeable for it.

The book’s major drawback is the interview structure, as Chapman uses a set of seven stock questions throughout. I’m not sure how important the average reader will think the make and color of the automobiles these artists arrived in Nashville in is, but that question is repeated with each interviewee. And in particular, Lambert’s interview just seems to run out in mid-thought, as though she was suddenly called away to some other appointment or duty. Editing the transcripts rather than using all the material verbatim would have tightened the book up. But the reader is left with the feeling that this is the way Chapman wanted the book, a rather loose and wandering conversation rather than a tight, compact, hard-hitting expose.

They Came To Nashville won’t change your life, but it’s still an interesting read for anyone drawn to songs and songwriters. The chapter detailing her almost sleepless, four-day bus ride with Nelson is more than enough to make this book damned interesting reading for any fan of country music.