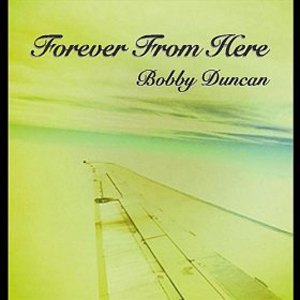 North Texas-based singer-songwriter Bobby Duncan has returned to his full-band ways with Forever From Here, his first album since 2009’s Faith, Hope and Everything Else. It seems as though the past couple of years of regularly performing as a solo-acoustic act made Duncan antsy to plug in and polish up, though the results are somewhat mixed. Duncan’s firmly established knack for crafting earnest lyrics is still evident here, but that trait fails to hold center stage due to the highly glossed-up audio veneer. At its best, Forever From Here is a well-crafted guitar-pop album in the vein of John Mayer’s better work; at its worst, it comes off as fluffy American Idol fodder. But although the amplified pop-rock arrangements consistently drown out the more interesting elements of Duncan’s writing, there’s still just enough sincerity and heart in the mix to warrant a closer listen. It all comes together best on the album’s title track, where Duncan’s engaging wordplay (“We need to reach for tomorrow, so don’t run from today”) aligns just right with the tune’s unabashedly poptastic piano majesty. — KELLY DEARMORE