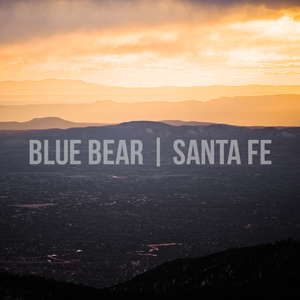 Still-new Austin band Blue Bear plays exactly the sort of indie rock you’d both expect and hope would spring from Texas: earthy and rooted but with a sort of restless, exploratory mystique that reaches to fill all those wide-open spaces and wander a couple million miles of backroad. Santa Fe might seem like a trifle on first glance, a slim five-song EP from five nice, unassuming guys united under a modestly quirky name. But the first listen is a different story, hearing each song unfold with the sort of inclusive, expanding grace that often touches on dreamy pastoral sounds (think Fleet Foxes or Bon Iver) before toughening up to more muscular pop-rock on par with the likes of Fastball or Ha Ha Tonka. It’s indie in budget, but mainstream in delivery; you could even two-step to the title track, should the spirit move you. The lead vocals — Jeremy Holmsley is oddly reminiscent of country legend Marty Robbins, especially on the Western-tinged “Homesick Ways,” and Brandon Aguilar’s got a gritty tenor your average singer-songwriter would kill for — lay a dependable foundation for some swoon-worthy full-band harmonies. Those chiming, unified voices could be considered Blue Bear’s ace in the hole if it wasn’t for the fact that they already seem to be holding a full house. — MIKE ETHAN MESSICK