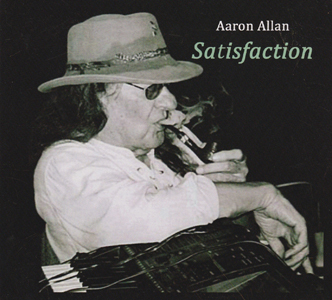 Aaron Allan was just another songwriter I wasn’t familiar with the first time I heard him at Cheatham Street Warehouse, but he had my full attention after Big Tom clued me in: “Willie Nelson recorded one of Aaron’s songs before most of the people in this room were born.” Allan, now in his 80s, really does have a remarkable story, and the highlights are chronicled in fine fashion on his new album Satisfaction. The double-disc collection runs over 40 tracks and plays like Allan hosting the radio show of his life. By track 12, he’s already shared the stories of getting his song into Willie’s hands, hosting Johnny Cash’s first radio interview, and receiving a death threat from Roger Miller. Allan’s portion of the singing is just him, a microphone, and a guitar — there’s no snazzy production gloss. His lyrics are simple, stark, and universal, swaying from the spiritual on “Truth Number One” to, well, spirits: in “The Bar,” a piece of wood that winds up a fixture in a drinking establishment shares its own life story. And Allan’s “Baby Blue” may well be the greatest white-trash love story ever told (but I won’t ruin the ending for you.) Halfway through the second disc, Allan yields the floor to a different singer, Chet McIntyre, who closes the album out performing Allan’s songs in a jazzier lounge style. It’s an odd change of pace, but it aptly demonstrates the versatility of Allan’s writing. Still, it’s his tale-spinning here that’s arguably the most satisfying thing about Satisfaction. Interspersed with the earthy, unvarnished craftsmanship of his songs, they capture an intimacy beyond just another songwriter’s night. It’s more like spending an evening on the porch with a troubadour historian. — CODY OXLEY