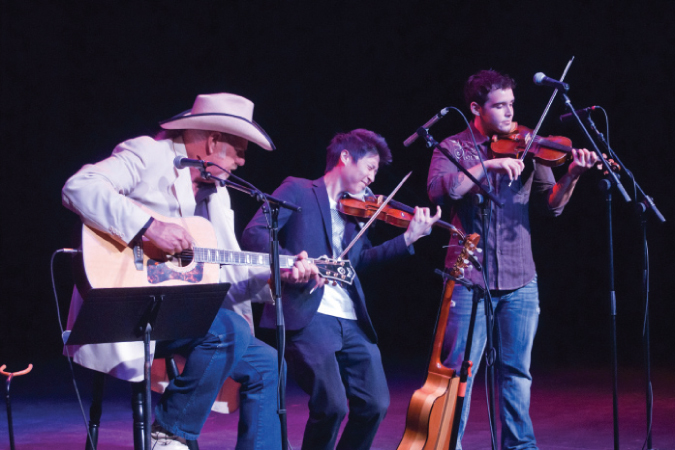 After playing a bouncy acoustic version of “Forty Dogs” at Austin’s State Theatre on April 23, Bob Schneider looked down at the 2012 class of Young Masters and joked “I know you’re thinking ‘That’s it?!’ I learned how to do that when I was, like, 4.”

Such are the thoughts that run through even one of Texas music’s best performers and artists when having to play in front of some of the state’s most talented high school students in music, theater, dance, visual arts, literature and media arts. Since 2002, the Texas Commission on the Arts and the Texas Cultural Trust have been bestowing the title of “Young Master” and granting scholarships of up to $2,500 a year for three years of study to the student recipients. Schneider and Asleep at the Wheel’s Ray Benson co-headlined an April 23 concert honoring this year’s Young Masters: Eric Boswer, Center Point; Brendan Carrillo, Waco; Michelle Garcia, Cypress; Mia Gerachia, Houston; Christian Kay, Tyler; Reagan Lukefahr, Houston; Mason Manning, McKinney; Cesar Martinez, San Antonio; Ani Mayo, Plano; Annyston Pennington, Amarillo; Eun “Susan” Seo, Euless; Morgan Tao, Rosharon; and Laurel Thornburg, Houston.

The highlight of the evening came when Benson — adhering to the old adage, if you can’t beat ‘em, ask ’em to join you — invited Young Master alums and Julliard graduates Christopher Vo and Charles Yang to accompany him on what had have been the coolest rendition of “While My Guitar Gently Weeps” Austin has ever seen. Then things went from high brow to back down to earth — good old Texas terra firma, that is — with everyone joining along in a celebratory “Miles and Miles of Texas.” With that, the tall one adjourned the festivities with the charge “Now go create!”

For more information on the Young Masters program, visit arts.state.tx.us. Applications are due every Nov. 15 on odd-numbered years, so you’ve got some time to get your acts together.