Amanda Shires: “Down Fell the Doves” 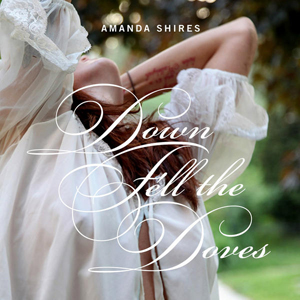 When West Texan Amanda Shires up ’n’ moved to Tennessee, it was obvious she’d never slide into the neo-hipster or bad big country of the 6-1-5. What wasn’t obvious was the springboard her creativity found: fearless excavations beyond classic song structure and odd metaphors in the name of clearer communication. Down Fell The Doves, her third album since landing in Nashville and first for Lightning Rod Records, opens with the staccato “Look Like A Bird,” hunting and pecking its way through a quirky, herky-jerky rhythmed song that suggests a Texas Kate Bush or punk pioneer Lene Lovich. Not a mannered performance, its precision puts the listener on notice: this is not what you’re expecting. Produced by Andy LeMaster in Athens, Ga., the album is a supple, at times noir collection of jewels that glitter in the darker places. “Box Cutter” is a truculent examination of too many ways to terminate one’s life; think Sylvia Plath buoyed by a burgundy undertone that makes suicide downright seductive. Equally mirthsome and macabre is the real-life gift of a tiger’s claw that inspired “Bulletproof,” an Addams Family worthy romp of all the ways Shires could stand for target practice if the giver’s claims were true. Elsewhere, she conjures fantasies both awkwardly adorable (“Song for Leonard Cohen”) and hopelessly romantic (“Stay”); but Shires is most engaging letting her doubt and jealousy spread like a wine stain, as on the Jason Isbell guitar-etched “Devastate.” Subtle, intoxicating, and clearly the work of a woman not afraid of her inner Flannery O’Connor, Down Fell The Doves marinates the singular and offbeat. — HOLLY GLEASON