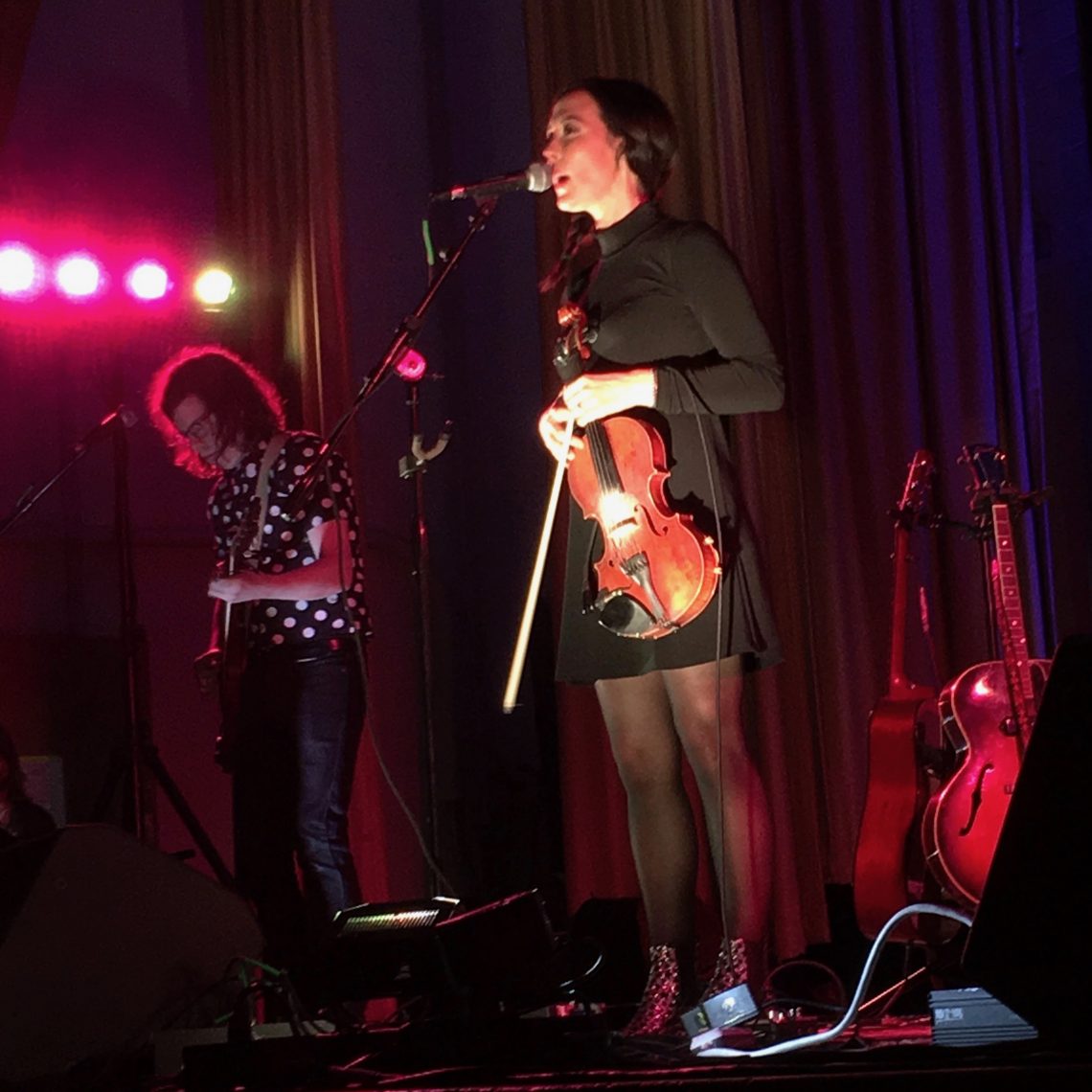 That’s how Amanda Shires introduced — but didn’t name — the last song of her concert Saturday night at the Texas Union Theater. It was a song that she and her three-man band had only just “learned” earlier that same day, en route to Austin from the previous night’s gig in Houston. As Shires explained to the audience, it’s sort of a game they play to pass the time on the road (and ostensibly keep everybody on their toes come showtime): Every day, the decide on a new song to cover, figure it out in their heads while their instruments are still packed away in the back of the van, take it for a quick test-drive during soundcheck, premiere it at that night’s show, and then never play it again.

“That means we’re doing this last song one time only, and only for you guys,” she said. “So if you don’t mind, if anybody around you is filming it, just knock the phone out of their hand, ok?”

She wasn’t kidding. And no, it wasn’t perfect. But fun? Oh hell yes. Because when has George Michael’s 1987 hit “Faith” ever not been fun?

Granted, that once inescapable pop nugget — born just five years after Shires herself — arguably had no business closing a 17-song set that inexplicably left out the Panhandle native’s own “Mineral Wells,” the stunning autobiographical highlight of both this year’s My Piece of Land and her 2008 sophomore album, West Cross Timbers. But it didn’t feel out of character at all coming from an artist whose between-song banter, whether affectionately introducing and teasing each of her band members (guitarist Zach Setchfield, bassist David Guy, and drummer Jerry Pentecost) or telling a lengthy but amusing anecdote about her early courtship with husband Jason Isbell, was as endearingly light and playful as the bulk of her original songs are darkly alluring and frequently unsettling. And given that this was their second-to-last road gig of the year, who could blame Shires and the boys for wanting to get a little office Christmas party silly and shake it like a Wham! man?

“Faith” — which featured every member of the band singing a verse — was actually only the evening’s second most fetching cover, after an utterly delightful, mid-set romp through Loudon Wainwright III’s “Daughter” (dedicated, naturally, to Shires’ own toddler Mercy back home in Nashville). But those moments of levity were in marked contrast to the mood set at the start of the show. After a solid but tad-loud for a small theater set by the likable Andrew Leahey & the Homestead (aptly described by Leahey himself as being yet another “long-haired, bearded, and jacketed rock band from Nashville”), Shires and her own band opened with “You Are My Home,” the ruminative, dead-serious devotional pledge that closes My Piece of Land. It would be three songs before Shires even said word one to the audience, leaving all the talking to her lyrics and the music — which was dominated from the get-go by her own strikingly emotive, chillingly beautiful violin playing, albeit with drummer Pentecost establishing his own MVP credentials early and often. The simmering, unabashedly lustful “Shake the Walls,” most of which Shires played pizzicato, proved a jarring but evocative chaser to the resolute “You Are My Home,” with the disturbingly alluring “When You Need a Train It Never Comes” completing the opening trilogy’s arc from love to carnal desire to passionate despair.

In theory, Shires could have kept things moving like that for the rest of the show, playing potent song after song and only breaking the fourth wall here and there long enough for a demure “thanks” or two. But strong as her songs are on their own, that would have been a bummer, because half the pleasure of an Amanda Shires show is actually just hearing her talk — which she thankfully did plenty of once “Train” was finished. The former fiddle-for-hire Western swinger may move in bigger circles these days, touring and collaborating with the likes of not only Isbell but Ryan Adams, Todd Snider and John Prine, but she can still converse as effortlessly with a theater crowd as she did for years finding her wings in the more intimate settings of house concerts and hotel room showcases at Folk Alliance. And not unlike such hall-of-fame raconteurs as Snider and Ray Wylie Hubbard, her best stories and “bits” only seem to get better with age and retelling.

“I’ve told this next story before,” she admitted halfway through the set, getting ready to intro “Bulletproof” with her familiar account of meeting a certain character named “Tiger Bill” after a show in Tampa, Florida. “But don’t give away the punchlines, because some people haven’t heard it! That’s why some people like Todd Snider don’t want to tell their stories anymore — because somebody’s always yelling out the punchlines … or stealing his shoes.”

Not surprisingly, “Bulletproof,” like the exquisite “Swimmer, Dreams Don’t Keep” and a handful of other choice picks from 2013’s Down Fell the Doves and 2011’s Carrying Lighting, proved as arresting as ever — at times to the slight detriment of some of Shires’ newer songs. Although My Piece of Land standouts like “Pale Fire,” “The Way It Dimmed,” “Slippin’” and especially the long, languid sweet sigh of “Harmless” all more than held their own, the urgent but somewhat nondistinctive “When You’re Gone” made for a curiously anti-climatic pre-encore set closer — especially coming right after Doves’ wondrous “Look Like a Bird.” But given the evening’s myriad other moments of both haunting beauty and disarmingly casual, aw-shucks charm, both that and the aforementioned absence of “Mineral Wells” are admittedly very small nits to pick. Shires may have opened her latest album with a somewhat wistful song about an old flame dimming the way fires sometimes do, but based on the evidence of nights like this, she’s still one of the brightest young lights on the Americana landscape. 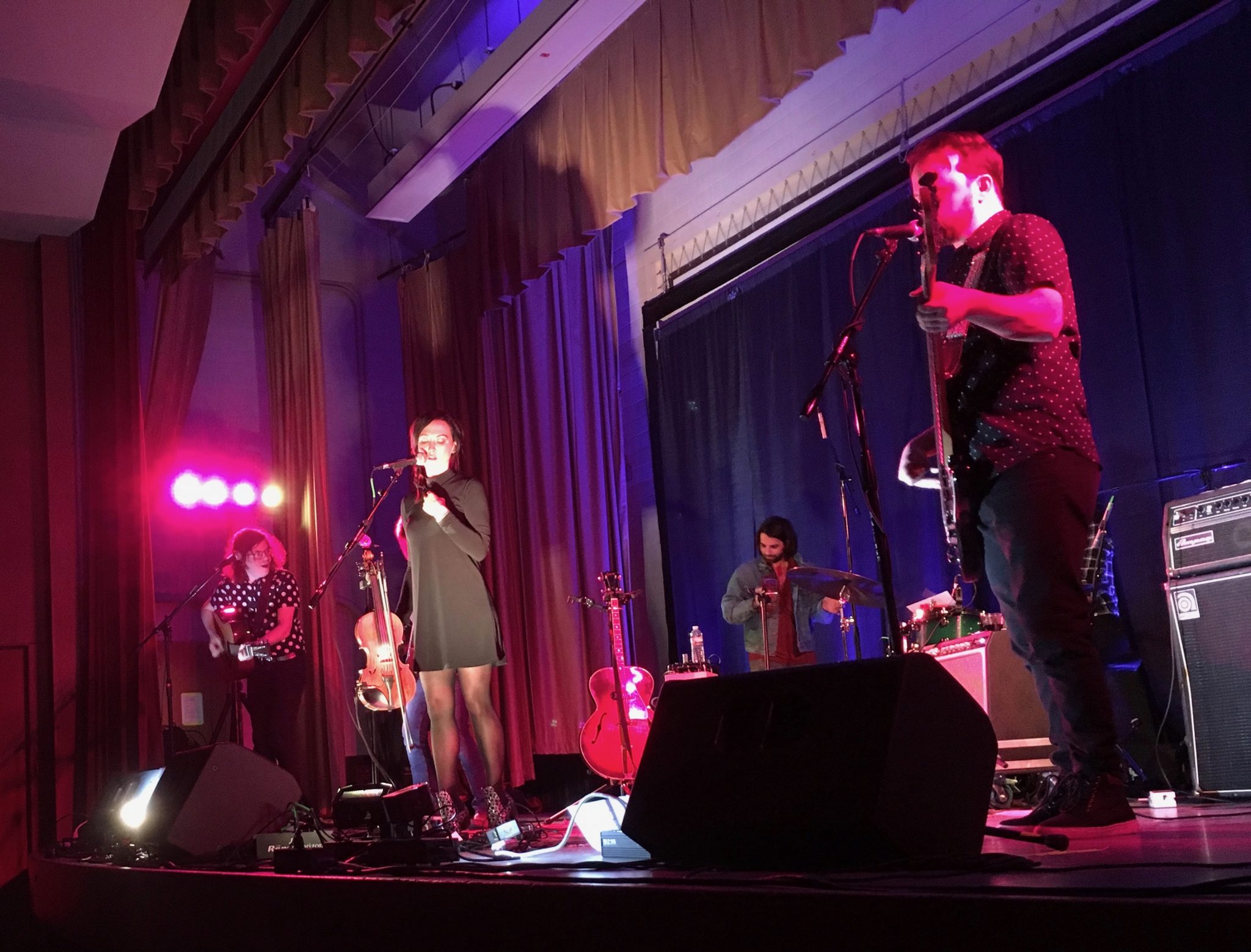 Amanda Shires and friends getting their “Faith” on. (Photo by Richard Skanse)