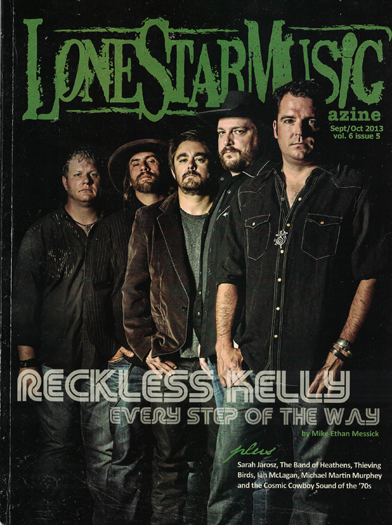 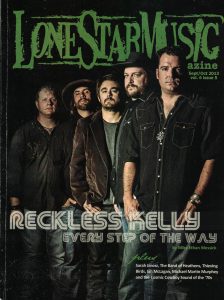 Every now and then, we put our heads together in the early stages of planning this magazine and consciously decide to do a theme issue, like the one we did earlier this year celebrating the music of San Marcos and, a couple of years prior, the Lubbock music issue tied to our cover story on Joe Ely. But more often than not, themes just sort of reveal themselves either after the fact or in a more subtle fashion as the individual stories start coming together in the design and editing stages — kind of like the way artists differentiate between full-blown “concept records” and albums made up of songs that just naturally complement and inform each other.

This particular issue of LoneStarMusic definitely falls in that later camp, but with hindsight, I like to think it holds together rather nicely as a tribute to Austin music mavericks and outlaws. Reckless Kelly, our cover subjects, have called Austin their home and have been making music by their own rules for 15 years now, and Mike Ethan Messick’s in-depth interview with founding members Willy and Cody Braun really gets to the heart of how they’ve managed to stay true to themselves for the whole ride, from 1998’s Millican to the brand new Long Night Moon. Theirs is a go-your-own-way rebel spirit very much in the proud tradition of the “Cosmic Cowboy” and “Outlaw” country artists who defined the sound of Austin (and beyond) in the 1970s, beginning in large part with Q&A-subject Michael Martin Murphey’s landmark 1972 debut, Geronimo’s Cadillac, and its 1973 follow-up, Cosmic Cowboy Souvenir. That Murphey Q&A in turn inspired this issue’s unique installment of Mr. Record Man, in which writer Eric Hisaw, rather than focusing on a single artist’s catalog, offers a sweeping tour of the whole progressive country scene of the early ’70s — from Murphey to Willie to Waylon to Doug Sahm and more.

I could continue to try and link this maverick/Outlaw theme — restless, cosmic or otherwise — to other stories herein, but apart from pointing out the obvious (Thieving Birds? Band of Heathens?), or the fact that Sarah Jarosz has been rocking the traditional bluegrass/acoustic music boat since childhood and that Austin’s favorite British expat, Ian McLagan, has rocked his merry way all the way into the Rock and Roll Hall of Fame, I’ll just leave it to y’all to have fun connecting the dots on your own. So until next time, happy reading — and listening.

Previous post The Avett Brothers: "Magpie and the Dandelion"