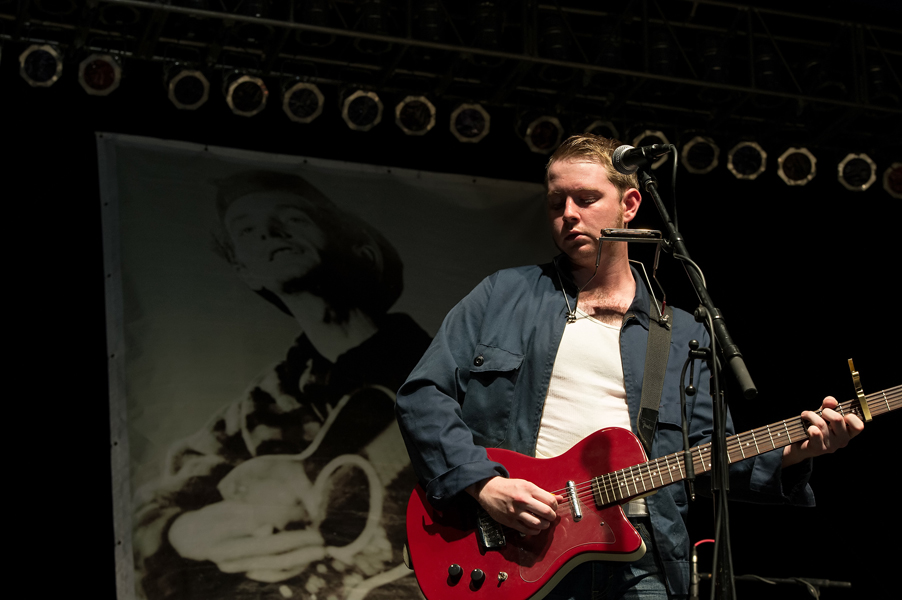 Highlights from this year’s Woody Guthrie Folk Festival — and a call for help to keep the annual Okemah folk celebration free for all.

More than 80 years after Woody Guthrie left his hometown of Okemah, Okla., John Fullbright, an Okemah native following in the legend’s “hard-travelin’” footsteps, stood beneath Guthrie’s portrait hanging over the main stage at the Woody Guthrie Folk Festival and sang a song called “Coming Home.” It had been many months, and many more miles, since the Grammy-nominated Fullbright had played before a hometown crowd, and his performance was greeted with enthusiasm both from the audience and from the other artists listening intently backstage.

Fullbright’s set was just one of the highlights of this year’s “Woody Fest,” which is held each year in Okemah over the weekend closest to Guthrie’s July 14 birthday (this year, it was July 10-13). Other young Oklahoma artists — Purcell’s Parker Millsap, Shawnee’s Samantha Crain, and Holdenville’s Lauren Lee & Liberty Road — gave standout performances, as did the New Orleans-based band Hurray for the Riff Raff. Steve Poltz’s playful antics, Grant Peeples’ acute observations, and Otis Gibbs’ gritty and endearing stories and songs also made for memorable sets, as did those by longtime festival favorites Butch Hancock (supported by his teenaged son Rory on guitar and, new this year, the washtub bass), Ellis Paul, Joel Rafael, Sam Baker, and orchestral composer/jazz fusion legend David Amram. And of course, no Woody Guthrie Folk Festival would be complete without Jimmy LaFave (a Woody Fest advisory board member) leading everyone in a stirring group sing-along to Guthrie’s most famous song, “This Land is Your Land.”

In honor of Guthrie’s legacy, the festival is free to the public. In order to keep expenses down, most artists donate their time, though the Woody Guthrie Coalition, the nonprofit organization that puts on the festival, does pay the artists’ travel expenses and lodging. However, due to an increase in expenses and a decrease in donations and other revenue, the Coalition has experienced a financial shortfall and recently put out a plea for financial support. Folk enthusiasts interested in making a contribution to help cover the expenses for Woody Fest 2013 and ensure that the festival can remain free for its 17th installment next year can find more information at www.woodyguthrie.com.