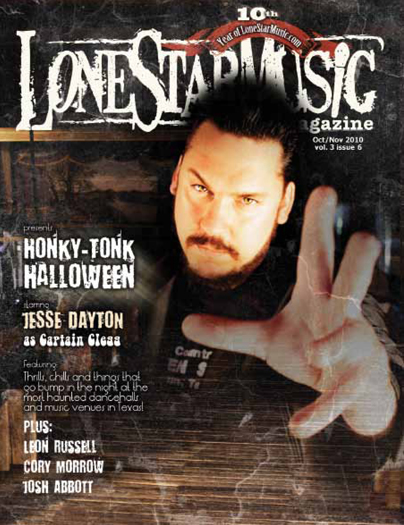 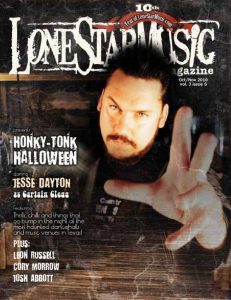 We started kicking around the idea of a Halloween/ghost-themed issue of LoneStarMusic way back in the spring — at my first real staff meeting after joining the LSM family. The pitch came from creative director Melissa Webb, who enthralled the rest of us with accounts of some of the ghostly activity she’s experienced in her New Braunfels office — two floors up from the recently restored Phoenix Saloon. This was right after Jesse Dayton had played the Phoenix’s opening weekend, which led to talk about his recent “Captain Clegg” side project, born out of his work with Rob Zombie on Halloween II. Throw in a handful of leads on other haunted Texas dancehalls, and quicker than it takes to say “boo,” we piled into LoneStarMusic’s psychedelic VW bus and were off on our ghost hunt — after a couple of quick stops at the Kerrville Folk Festival and the Carnival Welch.

Now, I know some of you out there might not think much of all this ghost story hokum. Fair enough. At the very least, I hope you can get into the spirit of the season and indulge us in a little fun outside the normal (ghost-free) Texas/Red Dirt/Americana music coverage. And for those of you who do believe? I think you’re in for a treat — trick free.

Personally, I’ve always been a believer. Or more accurately, I always wanted to believe, until I stared the paranormal face to face one night 15 years ago, and believing was no longer just a matter of choice. It was around the middle of my six-month, post-college stay in North Wales, where I bartended at the Royal Oak Hotel in the little mountain village of Betws-y-Coed. One of my coworkers there, Robert Barrow, knew about my interest in castles and Celtic “fairy” folklore (the two things that led me to Wales), so he invited me over to his house in another nearby village called Dolwyddelan — site of the ruins of the last stronghold of Welsh prince Llywelyn the Great, who battled to keep England’s Edward I from conquering Wales just as Mel Gibson was trying to keep the bloody English out of Scotland. Along with the castle, there was also the promise of the supernatural, as Dolwyddelan was supposedly rife with ghosts and spirits and such, and Rob on many occasions had told me about the ghost of an old man that he saw just about every night walking around the perimeter of his home (which had once been a parsonage). I didn’t end up seeing that, but just as I dozed off on the couch in the middle of the living room (with Rob and his mother already asleep in their rooms upstairs), I became aware of something watching me. I opened my eyes, and even though there were no lights on in the room, I saw the black-on-black shadowy figure of a man looking down at me from behind the couch. I wish I could say that it had glowing red eyes, but honestly, I can’t remember; judging by the shape of its inky black form, though, it was wearing a long coat and what appeared to be a fedora. I took this all in within a couple of seconds, before some primal instinct kicked in that made me sit bolt upright and swing my arm right at the damn thing. As soon as I “hit” it, it was gone.

Right. So, obviously, if you take a swing at a harmless shadow in the dark, you’re going to find yourself punching empty air … or maybe a coat rack. Usually, you might heave a sigh or relief or curse yourself for literally jumping at shadows. But from the second after I swung to this very day, I’ve been 100-percent convinced I had lunged at something real, or rather, surreal. There was certainly no denying the adrenaline still running through me, and there was a definite change in the feel of the room the moment the shadow disappeared. It’s hard to describe other than just … relief. Still, I immediately got up, turned the lights on and looked around the room, which was empty, and then I laid back down — lights on, naturally — and read until dawn.

Sometime the next day, either while visiting the castle ruins in the morning or on our six-mile walk back to Betwys-y-Coed (I think I did about as much walking during my time in Wales as the hobbits did in Lord of the Rings), I asked Rob if, in addition to the old man ghost that lingered around his garden, if he had ever seen anything inside his house. This without telling him anything about my own experience.

“You mean the man behind the couch?” he nodded with a chuckle. “Oh yeah. All my friends have seen him.” 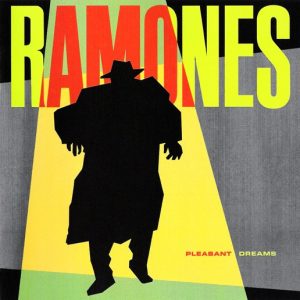 Rob was a joker, but this had been no prank. He would have to have been a certified ninja to disappear that quickly and silently. In the years since, I’ve come across countless descriptions of other ghost sightings that match my “man behind the couch” to a T. If you’ve ever seen the cover of the 1981 Ramones album, Pleasant Dreams (which I hadn’t at the time), that’s him, too. They’re called “shadow people” (duh), and the consensus among know-it-all psychic types seems to be that they’re not ghosts at all but rather beings from another dimension — evidentally, a dimension full of Burlington Coat Factories. Other people insist they’re more sinister or demonic, though, especially the variety that stare at you in your sleep (as opposed to just dashing around the room out of the corner of your eye). I lean toward the latter theory, because the being watching me most definitely felt evil.

Regardless — whatever they are, wherever they come from … they are out there. I believe this without a (literal) shadow of a doubt, because I saw one with my own two eyes. And then I punched it with my own fist.
Happy Halloween.