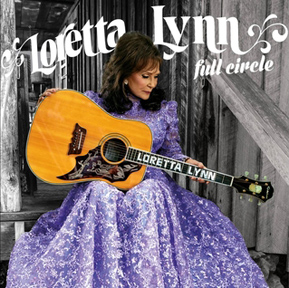 It may be hard for contemporary audiences to grasp just how much of an innovator Loretta Lynn was in her ’60s/’70s commercial heyday. At the time, Lynn’s stance as a strong, independent woman who wrote her own defiant, assertive songs was truly revolutionary. Now, at 83, she’s earned the right to reflect and celebrate her life and career, which she does with considerable warmth on Full Circle.

Lynn’s first new release since 2004’s Jack White-produced Van Lear Rose, Full Circle is a graceful autumnal victory lap whose spare, low-key presentation gives it the feeling of an intimate audience with the still-vital icon. Drawn from sessions recorded over an eight-year period with daughter Patsy Lynn Reynolds and John Carter Cash co-producing, the 13-song set finds Lynn dipping into her own songbook and interpreting various pop and country chestnuts.

Full Circle makes its intentions clear from the opening number, the bittersweet waltz “Whispering Sea,” which, as Lynn explains in a spoken-word intro, was her first-ever composition. She movingly confronts mortality on the originals “Who’s Gonna Miss Me?” and “Everybody Wants to Go to Heaven,” and on the Willie Nelson duet “Lay Me Down,” while Elvis Costello drops by to trade vocals with Loretta on the Lynn/Todd Snider co-write “Everything It Takes.” While those songs largely find Lynn in an introspective mood, her feistier side emerges on a sassy remake of her 1968 hit “Fist City.”

The remainder of Full Circle is devoted to Lynn’s readings of old standards, including a pair of Carter Family favorites, the swoony ’50s pop ballads “Secret Love” and “Band of Gold,” and the much-recorded “Always On My Mind.” In lesser hands, such choices might turn out sappy or redundant, yet Lynn delivers them with consistent taste and emotional insight, helping to make this aural autobiography a consistent pleasure. — SCOTT SCHINDER