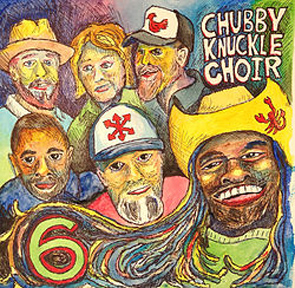 “More unique” isn’t a grammatically correct sequence of words, but Austin’s Chubby Knuckle Choir aren’t all that concerned with rules anyway and they’re definitely more unique than most of their Americana musical peers. The blend of influences is notably wider – partly due to their pass-the-mic approach to frontman duties – and the feel is looser, groovier, more informed by R&B and the darker edges of country-folk than the usual honky-tonk/Southern-rock crews the band sometimes shares the stage with. Gradually growing over the last few years from an eclectic part-time pursuit to one of the most-admired ongoing left-field success stories in Texas, the band has already made a significant tweak since their 2015 winner Reveille: singers/songwriters/multi-instrumentalists Luke Adair and Josh Droegemueller joined the group, filling a void left by the ample contributions of departing member “Slim Bawb” Bob Pearce.  Alongside founding members Tres Womack, Rory Smith, and Perry Lowe, they take their turns at expanding the band’s sound: though it’s tough to come off cohesive with at least five distinctive lead singers (bassist Dave Gould is vocally silent for the moment), there’s enough connective tissue in the band’s earthy grooves to keep 6 from coming off as a compilation album. Womack’s two lead efforts, “Get in Line” and “Tomorrow,” brim with jangly urgency that lands somewhere between R.E.M. and Hal Ketchum; Adair’s droll, twang-funk “Marionette” and Droegemueller’s stripped-down ’60s pop-leaning “Valentine” stretch the band’s boundaries and set the stage for the outfit’s bread & butter, the swampy rhythm & blues of Smith’s “Worried About My Baby” and Lowe’s “You Better Run.” Not a lot of bands show evidence of being influenced by Wilco and the Temptations, Lyle Lovett and Bill Withers, etc.  And not a lot need to, because at this point it’d be hard to top the Chubby Knuckle Choir anyway. — MIKE ETHAN MESSICK