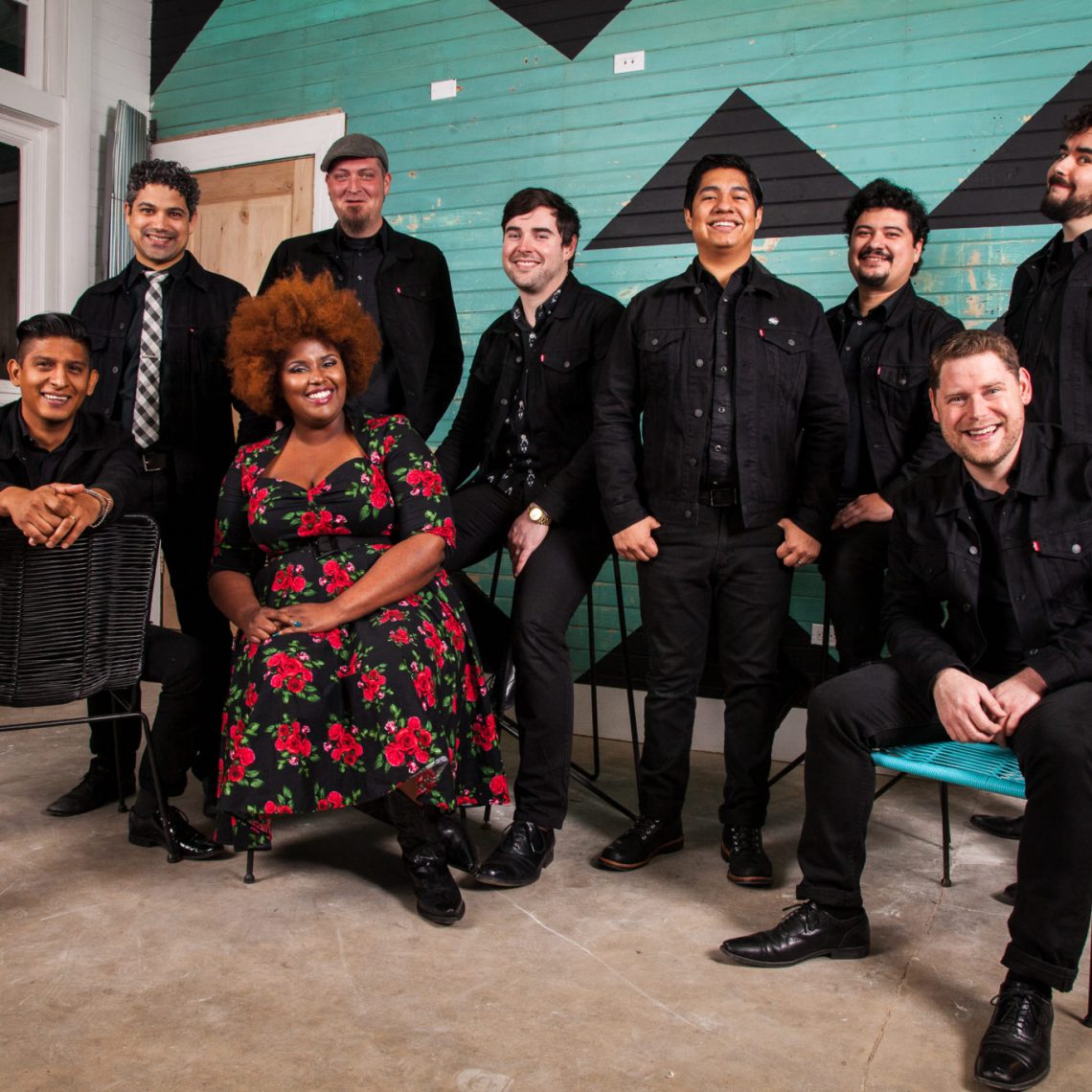 The Suffers are taking their contribution to the current soul music revival national. In the last year, Houston’s irresistible 10-piece ensemble went from sold-out shows at local clubs to top billing at the city’s Free Press Summer Festival and CMJ’s Music Marathon in New York City. Kam Franklin, the band’s charismatic lead singer and main lyricist, pinpoints the moment the band knew they had a shot at the big time.

“It was January 30, 2015,” she says, the excitement of the memory still resonating in her voice. “We got the call from David Letterman. We knew we’d either have to go on tour and release an album, or talk about how we could have played Letterman for the rest of our lives. We couldn’t afford to do it, but if we didn’t, we’d be skipping out on our biggest opportunity. So we did it. When the most respected man in late night is offering you an opportunity, you have to take it.”

And take it they did, with gusto. Letterman was so impressed with the band’s performance of their Latin-soul vamp called “Gwan” (as in, “get cha’ goin’”) that he gushed, “If you can’t do this, get out of the business!”

After that, the Suffers’ popularity exploded. They toured the country, blowing away crowds at the Hangout Music Festival, Austin City Limits, Newport Folk Festival, Voodoo Music + Arts Experience and SXSW. NPR’s All Things Considered came calling, as did The Daily Show with Trevor Noah. Impressive accomplishments for a group that started out as a weekend jam band.

“I grew up singing in church and the high school choir,” Franklin says. “Just before I graduated, I got invited to join a ska band, with some of the guys that are now in the Suffers. We started opening for Los Skarnales, a famous Tejano punk and ska band. A lot of us were in that band, or sat in with that band. That’s how the Suffers came to exist. Most of us have known each other for 10 or 15 years. We had strong musical and personal relationships before the Suffers existed. We were all adults with day jobs, 401Ks and serious bills.”

The band started by doing weekend gigs playing ska and reggae covers. When they began to write songs, their varied interests became evident. “My parents listened to the Fania All Stars, jazz and R&B,” says Franklin. “Other guys in the band grew up with blues, soul, country, Caribbean, Cajun, hip hop, flamenco, and Tejano music, as well as ska and punk. When we started writing and arranging, we decided to let the music go in any direction it wanted to go in. We moved away from ska and started playing the soulful R&B flavored tunes we’re doing today.”

The Suffers were tagged as a soul revival band, albeit one that writes their own material, but there’s more than soul in their sound. Adam Castaneda’s bass lines have a hint of dub reggae in them. Alex Zamora and Kevin Bernier inject guitar licks that drift from bluesy shredding to rippling surf music runs and mellow comped chords a la Wes Montgomery. Percussionist Jose Luna plays with a Latin feel, even on the rockers, while drummer Nick Zamora moves from subtle jazzy rim shots to crackling funk accents and a dense one-drop pulse on the kick drum. Keyboard player Pat Kelly and the horn section — trumpet player Jon Durbin, trombonist Michael Razo, sax player Cory Wilson — supply ska-like accents when they’re not floating freely through the mix, adding unexpected grace notes to support Franklin’s smoldering, melisma drenched vocals. They call their music Gulf Coast Soul, a term they borrowed from Houston’s esteemed singer/guitarist Barbara Lynn.

“Our soul music has a lot of aspects,” Franklin says. “That mix of races and styles is the epitome of what’s happening in Houston these days. It used to be a hip-hop and country town, but all kinds of influences have come onto the scene in the last few years. Gulf Coast Soul is a more fitting brand for what we do.”

The intensity of the band’s live show carries over to their recordings, which to date include a 2013 single, a 2014 EP (Make Some Room), and their self-titled full-length debut, released Feb. 12.

“When we made our first single, ‘Slow It Down,’ we tried to layer the tracks, the way people do these days, but it didn’t work,” Franklin says. “We went back and played it live, everybody in one room. It was imperative to capture the music the way our fans hear it in a club. It took a while to get it right, but it was exciting. We did the EP and the album the same way. You may hear a few mistakes, but we wanted to duplicate the organized chaos of our shows.

“We were going against the trend of what’s popular these days, but this is the kind of music we grew up listening to and it’s the music we still listen to,” she continues. “We want people to have a good time at our shows. We didn’t care if we were popular, so long as we could make the kind of music we liked to make.”

The Suffers are a co-operative. Everyone in the group contributes to the song writing, arranging and production. “There are arguments, but they’re never disrespectful and never go unresolved,” Franklin insists. “With 10 people in on the process, you have to be articulate. Someone brings in a demo and we build on it. Everybody has their input. It gets tweaked and added to and critiqued, until it becomes a song. We don’t limit ourselves in our approach. We don’t rule out any style or genre, we use anything that will make a song memorable. There are three or four section leaders that have responsibility for the arrangements. I’m the vocal section manager and I make sure everything sounds right. After we play it live, we tweak some more. If people bob their heads, we keep it. If it doesn’t work, we toss it.”

So far, the Suffers have been successful running their own label (Rhyme and Reason Records) and managing themselves. It’s not something they see changing in the near future.

“Labels were sniffing around a few years ago, but they were honest and said no one would take the risk of signing a band with 10 people,” Franklin recalls. “We mentioned Earth, Wind & Fire and Sly and the Family Stone. They said that was back in the day. That’s classic soul. We were going to ask them why they thought classic soul was not marketable, but it’s not our problem. Instead of accepting defeat, we let our friends and family be our label. We did a Kickstarter campaign, so everything we do is ours. We don’t owe nobody nothin’.”

Franklin laughs. “[After Letterman,] they’re sniffing around again,” she says. “They can sniff, but we’re gonna keep doing what we do, the way we want to do it.”