Q&A: Lew Card The "Condo Town Rag" singer on expanding his sound, digging Shinyribs, and his impending move back to Tennessee 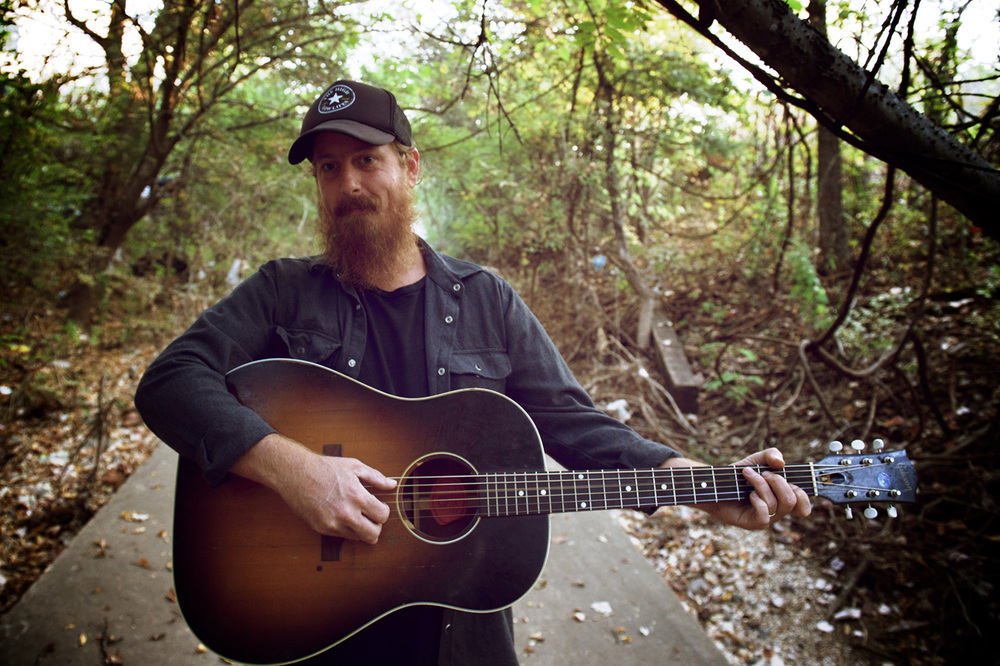 Reared on Appalachian bluegrass, singer-songwriter Lew Card left his native Tennessee for Texas a decade ago, initially finding his niche picking mandolin in and around Austin for several years before finally getting around to focusing on making records of his own. His 2014 debut, the spare Low Country Hi-Fi, leaned heavy on the vocal with a slim swath of instrumentation, with lyrics very much in the spotlight. It was a record that seemed to put Card squarely in the Americana new-traditionalist country corner, right alongside the formidable likes of Jason Eady and Sturgill Simpson. But as it turns out, Card wouldn’t stay pigeonholed for long. His new album, Follow Me Down (released in January), represents a huge stylistic shift. The words remain as poetic as ever — winking like John Prine and Randy Newman on their sunny days — but the record as a whole pops and swings and boasts an overall fuller, bolder sound. Among its highlights is “Condo Town Rag,” a pointed commentary on the Austin population explosion brilliantly illustrated in Card’s video for the song, featuring present day snapshots encroaching on historical photos as skylines rise and fall. We caught up with Card to talk about the changes in his music, his adopted home town, and his plans to pick up stakes later this summer and move his family back to his old hometown.

Your last album, Low Country Hi-Fi, had a unified sound, but Follow Me Down is all over the place. Were either of those on a purpose or did they just turn out that way?

The diversity of sound is a direct reflection of the many types of music that have influenced me over the years — and not only me, but also all the folks that played on the record. When I approached James Stevens to produce, we knew very early on that we were gonna give the songs (sonically) whatever they needed. I came to him with acoustic guitar and vocal demos. Then, we got the core band in the studio and recorded 15 songs live for preproduction. It was at that point that we decided the one constant was gonna be my voice; everything else we would experiment with along the way. If a song called for dropping a bag of heavy chains out of a tree onto a bunch of hipsters to get a sound, then so be it. I was never tempted to take it in any sort of cookie-cutter direction. For me, in a studio atmosphere, I want to take advantage of all the tools and trickery. Let’s make a fucking album! 50 years down the road I’ll be dead and gone but those 500 Vinyl and 1,000 CDs will still be floating around out there in the ether. [Laughs]

But why such a drastic shift between albums?

Just like Follow Me Down, Low Country Hi-Fi was a very conscious decision. Also recorded by Stevens, Hi-Fi was intentionally a record that was supposed to be less is more. One guitar, minimal drums, all acoustic. The main difference between the two albums is space. On Hi-Fi, there are mountains of it, and on Follow, we filled in the emptiness.

I see you’ve played shows with Shinyribs, and their horn section is featured on the album. Kevin Russell has said some very kind things about you on social media as well.

My relationship with Kevin started in the mid late-90s in Middle Tennessee. At that point, I was head high in bluegrass music, playing mandolin all day and night. Then a friend introduced me to the Gourds albums Dem’s Good Beeble and Stadium Blitzer. I could hear the influences that were shaping me through bluegrass in there, but with a twist. Come to find out many years later that twist was Austin. I never fully got it until I got to town and saw my first Gourds show. I remember looking up on that stage and here were these guys that were definitely not trying to impress anyone with their looks. Stained white undershirts and dirty pants — one might have even had shorts on. They were just playing what they wanted to play whether it be bluegrass, Cajun funk, punk, rap, or any of the many genres that band encompasses. It wasn’t till years later that I was running sound for Shinyribs at the Mean Eyed Cat [in Austin] that I got to really know Kevin.

Look, there are people in this music world that are genuinely good people that are in it for all the right reasons, and Kevin is one of them. He has a voice and all he wants is to share it with the world.

A perfect example of our relationship is when I asked Kevin to be part of this project I put together for Chris Marsh of the Mean Eyed Cat. When Chris’s vision of the Cat closed due to being priced out of the West 5th area, I got 22 people who had played there over the years to come to the house and record a Johnny Cash song. Just one instrument and a vocal, all live. Kevin asked me why I was doing it, and I told him it was to give back to Chris for giving so many musicians a home and countless dollars over the years. He didn’t hesitate and said he wanted to do “Big River.” “The Chris Marsh Sessions” was never sold or was intended to make money. It was a gift. There’s a lot of folks in this business that don’t have the time for those kind of shenanigans. Kevin is not one of them.

You’ve been in Austin for over a decade, but you’re returning to Chattanooga. Looking back, how has Austin treated you?

My experience with Austin has been nothing short of great. I’ve made friends here that I will have till the day I die. The caliber of musicians I’ve been fortunate enough to meet and play with is astounding. If I hadn’t moved here, I wouldn’t have met my beautiful wife. I believe everything happens for a reason, and I believe that reason was to meet Laura and have my kids Josie and Charlie. They are also a big part of the reason for the move to Tennessee as well. I really want my kids to grow up in an environment where they have freedom to roam. Not that they wouldn’t have that here, but Chattanooga is a way smaller town that is surrounded by some of the best nature our country has to offer. As for me, it’s just a change of scenery. This is the longest I’ve stayed anywhere since I left home at 17. Now I’m gonna lay roots for my kids where I grew up. I can do my job from anywhere out there. All I want to do is keep making music and share that with as many people in as many towns as possible.

You’ve been a witness to much of Austin’s fierce growth. Clearly that’s an influence in the “Condo Town Rag” video.

I moved here in 2001 for the same reason people come here now and 50 years ago. It’s an amazing city with a very special vibe. It’s unlike any other city in the world. But I’m not a big fan of the consequences of the growth. I wanted a song and a visual representation of the way it made me feel. The joke is “How many Austinites does it take to screw in a light bulb? 5. 1 to screw it in and the other 4 to talk about how cool the old light bulb was.” This video is my light bulb.

And you’ve been all over. As a performing artist, which city should you give it a go in?

If I could try my hand at any city as a performer, it would be New York. I know I bitch about big city growth in “Condo Town,” but New York, as big as it is, has an identity that has been well established since the 1800’s.

Besides the clichéd response of “don’t,” what advice would you give a musician considering a move to Austin?

I say go for it. I did, and I wouldn’t change my time here for anything. Oh yeah, and live in way South Austin!

You went for Chattanooga’s country for Hi-Fi, you went Austin’s diversity for Follow. Now that you’re leaving Austin and heading home, what will the next album sound like?

Not really sure what the next record will sound like. Could be bluegrass, country funk, a sad-ass songwriter album. I don’t want to limit myself to anything. Whatever it is, if I put truth and my whole heart in it, it can’t fail me.