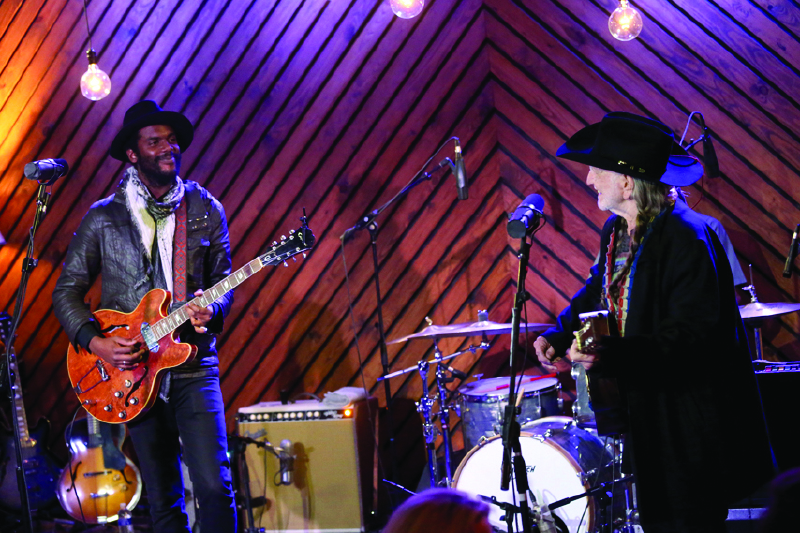 At 81, Willie Nelson is still releasing albums at twice the rate most music- making mortals do, and still spending more time on the road than at home. And now he’s branching out to TV with Inside Arlyn Studios, a new series featuring sessions taped in the homey Austin recording studio operated by his nephew, Freddy Fletcher, and Lisa Rainey Fletcher. Nelson will serve as the host; during two pilot episodes filmed in November, he also performed, first with Merle Haggard, then with Gary Clark Jr. 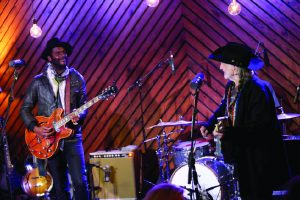 The show doesn’t yet have a distri- bution deal, but negotiations are under way. With Nelson’s name and its high- end production values — not to mention the involvement of AXS TV’s Dan Rather, who interviewed Nelson and Haggard in the first episode — an AXS time-slot announcement wouldn’t be a surprise. (The Dallas-based music- and sports-fo- cused channel, founded by Mark Cuban, lists as partners Ryan Seacrest Media, event presenter/venue operator AEG, top artist management agency CAA — which handles Nelson — and CBS).

Clark’s mid-November taping was a warm-up of sorts for recording sessions he’d slated there for his next studio album, due — along with his first child — in 2015. His proud parents sat in the living-room-like studio alongside Willie’s sister, Bobbie, and Susan Antone, sister of Clark’s early mentor, the late club owner Clifford Antone. Other guests perched on couches or floor cushions or sat at pub tables arranged through- out the warm, wood-paneled space. Thick oriental rugs covered the floor; globe-shaped bulbs glowing above the performers and candles clustered in control-room windows further enhanced the intimate ambiance. The vibe, more Live from Daryl’s House than Austin City Limits, was like being at a private concert with 100 cocktail-sipping friends.

Before introducing his uncle and ris- ing star Clark, Freddy Fletcher delivered a brief history of the studio from the same spot where his mother once serenaded restaurant diners. Opened in 1984, Arlyn was an extension of sorts to the adjacent Austin Opera House, the music venue Willie co-owed. Freddy named it after his father, and welcomed artists from Stevie Ray Vaughan to Marty Stuart and the Butthole Surfers before leasing it to a recording school for 10 years. With Aus- tin restaurateur/club owner Will Bridges and T. Murphey as partners, the Fletchers began restoring it in 2012, combining the Neve mixing board from Nelson’s Peder- nales Studio and Arlyn’s API board into a super-console.

Arlyn has hosted many high-profile events since it reopened, but this one felt special.

The understated Clark hung in the background while Nelson finger-picked his loyal Trigger and sang “Rainy Day Blues” and “Nightlife,” backed by bassist Johnny Bradley, drummer Jay Moeller and Family Band harp player Mickey Raphael. When Nelson handed over the reins with the words, “Play it, Gary,” Clark’s long fingers began the first of several flurries along the neck of his Epiphone Casino. “I’m a little nervous,” he said. “It’s kind of a big deal.”

As farfetched as that might sound coming from guy who’s spent the last few years sharing stages with bona-fide guitar gods and playing for the presi- dent, Clark does have a bashful streak — and besides, he wouldn’t lie in front of his parents. But his nervousness was impossible to detect from his fluid play- ing on a half-dozen tunes, mainly blues classics contained on his fine new re- lease, Gary Clark Jr. Live.

With a baby on the way, a wedding to plan and his commitment to help re- open Antone’s in a new location, Clark’s got a lot of reasons to stick around Aus- tin for a while. And if Inside Arlyn Studios gets picked up, it looks like Willie might, too. Maybe they’ll lay down some shared tracks while they’re at it. Whether it’s on TV or not, in this town, blues cats and cosmic cowboys belong together.