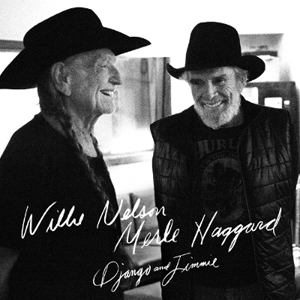 The gatefold photo for Willie Nelson and Merle Haggard’s new album shows the two troubadours seated at a tour bus table, lost in a late night card game. Indeed, Django and Jimmie has the amiable, laid-back feel of just that — two old pals on a joint tour, laughing about how “It’s All Going to Pot” and reminiscing about old friends (“Missing Ol’ Johnny Cash,” with Bobby Bare making a cameo appearance) and getting old (paraphrasing the great University of Texas quarterback Bobby Layne as they sing, “we would’ve taken much better care of ourselves/if we’d have known we was going to live this long” in “Live This Long”). They pay homage to their contemporaries (brilliantly interpreting Bob Dylan’s “Don’t Think Twice, It’s Alright”), their influences (in the title song, a tribute to gypsy-jazz genius Django Reinhardt and “blue yodeler” Jimmie Rodgers), and each other (Nelson covering Haggard’s “Somewhere Between” and Haggard covering Nelson’s “Family Bible”). It’s been 32 years since these “come whatever, unfair weather friend[s]” first sang about “living on the road, my friend,” on 1983’s Pancho & Lefty, and though their voices have been well-weathered by the miles they’ve traversed, if this album is any indication, they still enjoy singin’ the blues all night long like they used to, perhaps now more than ever. — TIFFANY WALKER