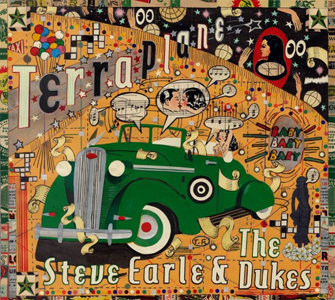 After three decades of album making, Steve Earle’s hardcore-troubadour credentials are just about bulletproof. His track record when he’s ventured outside of his country-rock comfort zone has been a bit spottier. While such departures as 1995’s revelatory acoustic comeback Train A Comin’ and the playful 1999 bluegrass excursion The Mountain found him tapping new creative strengths, the stale lite-electronica and half-baked world-beat of 2007’s Washington Square Serenade felt clueless and presumptuous. So the news that Earle was working on a blues-inspired album seemed less than promising.

Fortunately, Terraplane is a blues record the way that Exile On Main St. and Love and Theft are blues records. And while none of its 11 originals seem likely to find a place amongst the artist’s most enduring compositions, the album is a powerful testament to Earle’s gifts as a performer and recording artist — and to his organic rapport with his current edition of the Dukes, i.e. guitarist Chris Masterson and violinist Eleanor Whitmore (aka the Mastersons, a formidable recording unit in their own right) and the longstanding rhythm section of bassist Kelly Looney and dB’s drummer Will Rigby.

While some might hear such tunes as “Baby Baby Baby (Baby),” “You’re the Best Lover That I Ever Had” and “Go-Go Boots are Back” as Earle in coasting mode, Terraplane’s relative lack of personal revelation and political content is kind of the point here. It’s a vibe record rather than a song record, which is fine, since the vibe encompasses some of the most relaxed, uplifting music that Earle has ever released.

With appropriately unfussed production by roots-rock vet R.S. Field, such lyrically bemused numbers as the crunchy “The Usual Time,” the shaggy-dog spoken-word “The Tennessee Kid” and the Earle/Whitmore duet “Baby’s Just as Mean as Me” are ideal vehicles for Earle and his band’s seamless chemistry. And the stirring, heart-on-sleeve “Better Off Alone” strikes an affecting — and, in this context, atypical — note of introspection that’s one of the few overt reminders that Earle was in the midst of his seventh divorce while writing this obviously therapeutic set. — SCOTT SCHINDER