Will Hoge: “Never Give In” 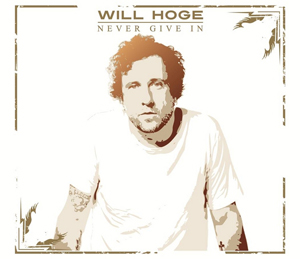 WILL HOGE
Never Give In
Cumberland Records

Sometimes you want to tap the brakes on being too critical of modern Top 40 country music: those songs are written by real people, sung by real (if somewhat overly image-conscious and auto-tuned) people, and bought and enjoyed by real people that may well be reading this right now. But it’s hard to listen to more than a few minutes of it and not wonder where all the real people are in the songs; perhaps, crowded out by all those snuff-dipping, mud-tire obsessed redneck caricatures in the mainstream hits, they all migrated to the imaginations of relatively under-the-radar guys like Will Hoge. A source, friend, and aspirational figure to plenty of talented Texas artists just a shade younger than himself (the Eli Young Band took one of his songs to No. 1 last year, and you hear him echoed in the music of Wade Bowen and William Clark Green, among others), the versatile Tennessee native doesn’t always paint pretty pictures, but he certainly knows how to give them some depth. There’s wives who hock wedding rings to save their foolhardy husbands, kids who wonder why their daddy never smiles, and the possibility of failure or addiction lurking around every corner. On the upside, you’re never too low for redemption (“Different Man”) or short on heroes (“Strong”), and even the darker stuff never fails to sound at least beautifully bracing (“Home Is Where the Heart Breaks”) or just sadly pretty (“Daddy Was a Gambling Man”). Not every at-bat is a home run, but it’s never for lack of swinging and Hoge’s average probably tops 90-percent of the other records you’ll hear this year. With a Bob Seger-ish gift for welding common-man sentiment to heartland rock arrangements that are fulsome but never cluttered, and a gritty tenor with just enough nose in it to be distinctive and relatable, he sounds better and digs deeper than most modern country artists dare to. If the mainstream ever gets around to making that a virtue instead of a hindrance, Hoge would truly have it made. — MIKE ETHAN MESSICK

Previous post Matt the Electrician: "It's a Beacon, It's a Bell"